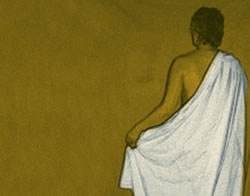 Double dose + double drama = double trouble. A multiplicity of ideas and concepts all trying to be achieved on the same night resulting in a muddled hump of mess. The heat of the thematic content such as global warming, climate change, old flames and lukewarm lovers was doused by the predictable humour, limp bodies and chilling air conditioning. The result? What promised to be an evening of refreshing new playwriting turned into drawn out hours of stale, stagnant performance.

Double Feature, presented by Switchboard Arts and MAP Theatre Company, in association with the Judith Wright Centre of Contemporary Arts, was an opportunity for several Brisbane based playwrights and artists to showcase their work in a professional environment. The evening’s bill consisted of two works: Lexie Turns to Stone, written by Patrick Carr; and Lie Down Comedy, created and performed by the emerge Comedy Cohort.

The evening began well. The performances were set in a studio room, with minimal lighting; informal, up close and personal seating; and basic set, creating an intimate, cosy and comfortable atmosphere – something one would expect of low-budget, semi-professional performance. The lights dimmed, and the audience sat patiently in anticipation of the latest play by Premiers Award Nominee Patrick Carr.

Confusion then began to set in. While the program and advertising had given the impression that Lexie Turns to Stone would be played first, two jesting army officers appeared on stage and began ranting about the “War on Mother Nature.” After a few minutes of trying to understand how these officers were meant to fit into the Gold Coast scene, it became evident that this instead was the Comedy Cohort performing Lie Down Comedy. And it seemed that this messy beginning to the evening’s performances wasn’t a good omen.

Lie Down Comedy attempted to poke fun at grandiose issues such as the War on Terror and Iraq, the Liberal government, global warming, and water restrictions. Clearly performed using Brechtian techniques, the piece was fragmented, ironic and self-reflexive. However where Brecht uses alienation to convey a political message, Lie Down Comedy used comedy without ever taking a serious stance. I was left unsure as to whether they were saying “global warming is happening anyway and there’s nothing we can do about it” or if it was “we need to do something to stop global warming.” It felt like a perplexing lecture that was accompanied by song and dance.

Their humour was obvious, lacking subtlety and refinement, instead resulting in brash silly gags. While they seemed to make some attempt at slapstick it appeared that something was missing and it just became slack. They had delightfully animated faces, yet these were not complemented by interesting physical action. Static, still bodies were the main visual display. There were some funny moments – their solution to stop the world’s overpopulation crisis that “It’s human to be homo” certainly struck a cord – however on a whole it was childish and underdeveloped.

Lexie Turns to Stone (when it finally started) was better yet still ultimately lacking. Patrick Carr’s script was certainly intriguing. The play was set on the Gold Coast, and explored the relationships between Chris, a sculptor, who is commissioned by his mate Lonnie to carve a statue of his wife and Chris’s former flame, Lexie. Chris’ daughter Angelica appears, manipulating everyone she meets and threatening to expose Lexie’s feelings for Chris to husband Lonnie.  Lexie decides to set Chris up with her friend Lola, to provide a distraction for them both, but with Angelica acting the tease to Lonnie, Lexie decides if you can’t beat an enemy, join them. Lexie partners up Angelica and the two concoct a plan that everyone can be satisfied with. However, of course, things do not go to plan.

Carr’s plot was diverse, his characters were complicated and multifaceted, yet at times this made for a confusing performance. Chris also had a girlfriend type character however she was never established well from the beginning, thus making several parts of the play unclear. The dialogue between the actors which was at times so punchy and quick-witted that we missed half the lines, lacked in action-reaction type playing. The actors pre-empted the dialogue, expected it, and were reacting to lines before they even heard them. This gave the impression that everyone knew what was coming next – it lacked in surprise. The actors’ physicality was non-existent. Clichéd walking back and forth and picking at items of clothing were the most active movements of the entire piece. The character of Angelica was so ruthless, so conniving and so mean that she lacked reality. And Lexie’s turning point in the play seemed to come out of nowhere.

The writing was good, the ideas were good, they just didn’t translate well into challenging contemporary performance.  Where was the radiance? I walked away disappointed. The two performances both seemed to attack too many issues in too short an amount of time, casting out individual ideas and views that did not harmonise into a holistic evening of art. Too many ideas, too little physical presence, and Double Feature is what you get.