At What Cost? | Belvoir 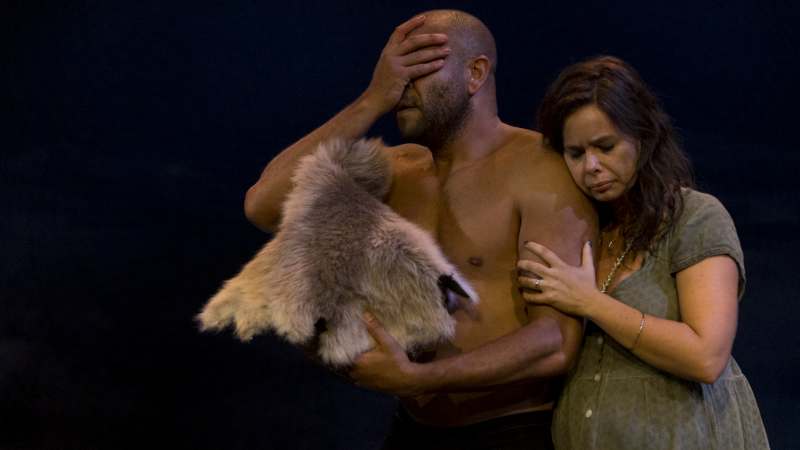 “Obsessed? I’m obsessed about being dispossessed.”

He’s railing against the tick-a-boxes, people claiming to be Aboriginal, with no apparent ties to country, language or culture, which he sees as a running sore of barely concealed suppurating white supremacy, a sort of oozing clandestine colonialism.

In Lutrawita (Tasmania), Boyd’s got plenty on his plate – approaching parenthood, a partner who’s pushing for time with her mother after the birth, accommodating a cousin returned to mob after time away in Melbourne, plus the repatriation of the stolen remains of William Lanne and the sacred responsibility of his cremation ceremony.

Boyd takes his duties seriously especially the cultural and spiritual responsibilities, so when a white woman pitches a tent nearby he is suspicious of spurious motives. Having failed to eradicate indigenous culture, groups of “hidden aboriginals”, self declared descendants are pushing to claim culture as their own, and Boyd believes this woman, Grace, is such a tick-a-box.

Suspicion escalates as Grace seduces Boyd’s recently reconciled cousin, Daniel, and reacquaints with his wife, Nala, who she worked with many years prior. Boyd sees this inveigling as a primer for invasion take two.

Directed by Noongar man Isaac Drandic, who helmed the haunting City of Gold for Griffin a couple of years ago, At What Cost? stars proud Wiradjuri man, Luke Carroll as Boyd, Gumbaynggirr, Dunghutti and Bundjalung woman , Sandy Greenwood as Nala, Alex Malone as Grace, and recent NIDA grad, Ari Maza Long as Daniel.

Jacob Nash’s set design is exquisite with its ochre walls, star studded sky, and bleached bone ghost gum perimeter which acts as practical prop as well as aesthetic and symbolic compliment. Keerthi Subramanyam’s costume design is similarly sublime, depicting character in the day to day and exalting in the ceremonial.

At What Cost? is a complex piece of work, full of righteous anger, full of family love, the writing raging and wide ranging, the performances sublime, the imagery transcendent, the direction of Isaac Drandic precise and commanding.

Urgent, pungent, provocative, coruscating and haunting, like City of Gold, At What Cost? is a theatrical statement of the heart, an absolute MUST SEE.

Belvoir presents
At What Cost?
by Nathan Maynard