With the world struggling to find a new norm in these ever-changing circumstances, never has the phrase “the show must go on” been more apparent. Even if we have to delay the opening due to Greater Brisbane lock down; even with only a 50% capacity allowance; even with mandatory masks for patrons: these are harrowing times indeed, but thankfully, the show did go on.

With what could be the expectation-of-the-times (and the foreseeable future) the stage remains an important structure in our arts culture. You feel for the performers, with their livelihoods hanging in the balance and ready to be boxed up within a moment's notice. No one can predict how the days will unfold in these current times and it brings a certain atmosphere to the show, somewhere between melancholy and absolute anticipation. It may just be a feeling, but I swear the ensemble sang louder and prouder than I have ever witnessed before; I guess you never really know when the curtain will fall, in more than one sense.

Glitz and glamour, what we would expect from a Broadway style show, Shrek The Musical, stopped at nothing short of spectacular. The stage and lighting has a wonderfully comical feel, bathing in a grand green glow, and the costumes are jam packed with colour, novelty and fun! The gang's all here with an ensemble of fairy-tale characters that young and old will recognise. Singing and dancing the woes of being the downtrodden in 'Story of My Life', we can all feel their emotions. We also have an insight into the back story of many characters, including the life of a little Shrek, evolving into who he is today.

Shrek (Ben Mingay) has the stance and carry of the mightiest of Ogre's, his voice booming out to the farthest reaches of the audience with such clarity he hardly needed a microphone. The story parallels that of a young Fiona (who on this night was played by Freya Callaghan, making a stellar debut into professional theatre) who has counted the days, every day, waiting for her knight in shining armour. A seamless transition of young, teen (played by Annie Chiswell) to current day Fiona (Lucy Durack) in the song 'I Know It's Today', really showcased the fluid and smooth work of stage setting: respect should be given to Tim Hatley who took on the 'triple threat' challenge in a different way by mastering Set, Costume and Puppet Design. Yes, a force to be reckoned with!

With many new aspects of the story of Shrek, this production has not only nailed the brief of entertainment for the older crowd, but has kept the younger audience captive with many current pop-culture references that children will understand and adore, but would drift right over an adult unless they are following current children's trends. It was fun to see little snippets that were designed just for the joy of the younger crowd and will definitely perk up eyes and ears of junior audiences. The adults won't miss out either with some of the same treatment reserved for them. I refuse to give away the fun but I will make a very special mention to Lord Farquaad (Todd McKenney) who, by original design, was obviously made to entertain adults. I still, to this day, giggle at his name! McKenney has taken on the role and transformed it into one of the funniest, silliest characters to brace the stage, making a loveable larrikin out of a much-despised villain. 'What's up Duloc?' has Farquaad draped in enough razzle-dazzle it would keep 'Kinky Boots' in business! This might be McKenney's most fun role yet and really added an extra layer of hilarity into an already very ‘fun’ show. The friendship between Shrek (Ben Mingay) and Donkey (Nat Jobe) had a really comparable feel to that of Astaire and Kelly and brought warmth and camaraderie to the characters in a new and joyful way.

As usual, the musical component blew the diverse audience away with something between a New Orleans Big Band and Rock 'n' Roll sound that pairs perfectly with the cast. The orchestra lines it up and the cast keeps knocking them down! None more so than the Dragon (voiced by the much-loved Marcia Hines) who bellowed ballads of love and breathed fire into our souls. Hines' performance did so much justice to the enormity of the Dragon puppet. Again, well done to Tim Hatley for his superb mastery of puppet design. He really captured the essence of the Dragon, ‘breathing’ it to life.

The show really takes the much-loved story of Shrek to a new level, with each of the characters having a back-story weaving intricate details, bringing an entirely new feel to the show and helping ‘humanise’ many of the characters, bringing the message loud and clear to 'Let your freak flag fly!' More importantly, the message, “beautiful ain't always pretty...”, a sage and heroic message to drum into the new generation (in this reviewer's humble opinion).

This show is jam packed with laughs for young (and young at heart). Shrek The Musical is brimming with smiles, subliminal messages and silliness in a time that so desperately craves it. The cast that singing ‘extra hard’; dancing double-steps and really bringing the absolute magic to the stage, in times that are proving that any curtain call could be the last (for a while). There is no time like the present to keep the arts alive, and at the forefront of our hearts and minds. I knew Shrek The Musical would be a brilliant show, but then I saw the stage, now I'm a believer. 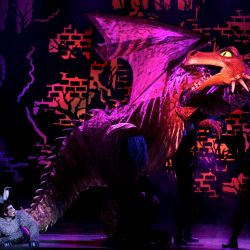 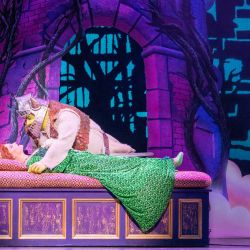