Takeover is a production devised, written, and performed by members of the Bangalow Theatre company in response to Covid-19.  The production was not only devised with Covid restrictions in mind, but also, as its title implies, was a response to the way the apparatus of the state, in Australia and all over the world, has challenged our freedoms in the name of protection from the virus. The preparation and staging of this show demonstrated both entrepreneurial and artistic ability on a very high level.

The show takes the form of a series of short sketches performed in different venues within the village of Bangalow in northern NSW. The audience for any one night is divided into five groups of twelve people, each of which walks between the venues, so that there is only a Covid-safe number of people in any venue at any one time.

The complexity of the logistics and planning of this can only be imagined. However, each group was hosted genially by a member of the company, and the timing was managed with great precision. Which was just as well, because there were sputters of rain from time to time.

The individual sketches included a few short one-idea pieces, including a monologue by Robert Gibson about the loneliness and meaninglessness of life in lockdown (Every day is Sunday), a dance piece about its physically cramped enforced domesticity called Respire, and an exquisite harp solo, played behind plexiglass by Alicia Dawes-Salazar. The one I found the most touching was a performance of the Flower Duet from Lakme, which honoured the response to the lockdown in some Italian towns, where people sang from their balconies. It was beautifully sung by Emma Graves and Joanne Connor, appropriately, from the balcony above the Italian Diner.

The more extended sketches included Underground Arts, a scene devised by Bangalow Theatre’s director, Anoushka Gammon, which imagines a dystopian future, and was played under the old railway bridge. 10 years down the track, the government has still not lifted restrictions, and the disastrous results of philistine decisions about supporting the arts, such as the federal government has made recently, come home to roost. Today’s homeless have been replaced by the most creative and imaginative people in the population, who are now completely ostracised from society. Too short for a plot, but too long not to have one, this sketch nonetheless made a telling effect with its abundance of references.

In some ways the most sophisticated sketch, or pair of sketches, was the juxtaposition of Three Pianos with Too much space. These sketches, listed separately, were played successively in the same space (the Scout Hall). Three Pianos (and there really were three, brought by Fred Cole from his collection) began with a canon between the pianos, based on a phrase vaguely reminiscent of something by Elton John. This finished, and the third piano began with a phrase that I assumed would also be developed in a canon. But the other pianos then entered with their own quite different music, which was overlaid by a drum kit. The music, composed by one of the pianists, Melia Naughton, became more and more frenzied, and finished in mid-air.

This segued into Too much space, a theatre sketch performed by Joel Cooper and Melia Naughton, accompanied by one of the pianists, Nerida Hornery. The form of this piece, astonishingly, exactly followed the form of the piece for three pianos. The canon, where each instrument played the same music, was represented by a scene of harmonious domesticity where the couple, in lockdown, make sourdough bread together. The discordant second half of the piano piece was represented by an argument developing between the two people, resulting in the man simply leaving. I thought this pairing, doing the same thing with form in two different media, really thought-provoking.

A witty comic interlude was provided by a take-off of Material Girl by Nicole Sullivan, with a group from the company as dancers. It was mainly a video (remember, when Material Girl came out videos with songs were quite new) where Nicole Sullivan was both in costume and out of it, both on the screen and off it. The screen has become reality for even more people than before during these Covid times.

Another theatre piece by Anoushka Gammon concluded the series of sketches. Here an old couple, forced into even closer union than usual, reminisce about their life together. On stage right are a young couple, who we at first assumed to be the actors 40 or 50 years ago. But they turned out to be the parents of one of them, and this ambiguity lent a depth to the sketch that put the opportunity for reflection that lockdown afforded for some people into multiple perspectives.

Takeover is a demonstration of how artistic imagination can flourish even under the most threatening conditions. I hope it is the kind of thing that is going on all over Australia, in small theatre companies which operate, as it were, under the radar. It is a privilege for me to review this production for a national online journal. 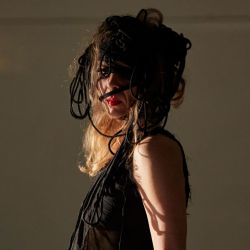 Blackheath Chamber Music Festival 2022
This year's line-up, a cross section of some of the finest chamber ensembles in the country, would have graced any of Australia’s more well established festivals, and it is a massive endorsement of...
Wayside Bride | Belvoir
Infectiously entertaining and rivetingly alive, Wayside Bride is a boldly embroidered quilt covering a period in the 1970s when Ted Noffs' Wayside Chapel established itself as a sanctuary for the...