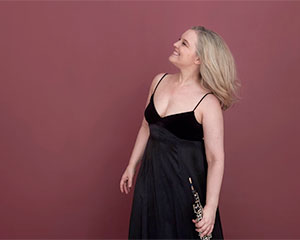 The Bangalow Music Festival has now been an annual event for 17 years, and, together with the concerts run throughout the year by the Byron Music Society, forms the backbone of the classical music offerings in the Northern Rivers area of New South Wales. Founded by Paul Dean, and now run by Tania Frazer, it consists of a weekend of nine chamber music concerts centred around the Southern Cross Soloists, with many guest artists, so many, in fact, that they can make a small orchestra for some of the concerts.

The Southern Cross Soloists consists of seven players, all virtuosos in their own right, based in Brisbane. Oboist Tania Frazer is one of four wind players; the others are Lisa Andonovska (flute), Ashley Smith (clarinet), and Ysolt Clark (horn). These are joined by two string players, Alan Smith (violin) and Meta Weiss (cello), and the group is completed by Alex Raineri on the piano. This group is strange for one reason – apart from a handful of pieces written just for them, there is nothing in the entire literature of music up to the end of the 20th century for this particular combination of instruments. So in performance they tend expand to a small orchestra, or contract to various chamber music groups; piano trio, wind quintet etc. But they also do that to the music they play. Their arranger, John Rotar, expands music originally written for piano to various versions of their ensemble, and also contracts music down from orchestral scores to fit them. This was an extremely common practice in the 19th century, but became less so during the 20th, when recording technologies made music in its composed form widely available to audiences.

The first concert of the Festival presented 5 works, of which four were “arranged down” and one, Debussy’s L’isle joyeuse, “arranged up”. Tania Frazer announced at the start that the theme of this year’s Festival was to explore the essence of music, what it was really about. Certainly a noble aim, recalling Beethoven’s superscription to the Missa Solemnis, “It comes from the heart, may it go to the heart”. This theme was indeed brought out later in the festival, but in the first concert, and also in the one which immediately followed it, there was more focus on the fantastic virtuosity of a few individual players than on the emotional power of the music itself. After the ensemble gave a somewhat brash rendering of Bernstein’s Candide Overture, Alexandra Flood sang his Glitter and be gay, and glittering well describes her performance. Then Ashley Smith gave a divine performance of Debussy’s première rhapsody (there was never a second one), and Alex Raineri dazzled the audience with Liszt’s Totentanz, which is a bit of a galumphing piece, but certainly not for the faint-hearted, and Raineri had the audience on its feet at the end.

In between there was a slightly disappointing performance of a scaled-down version of Debussy’s scaled-up version of L’isle joyeuse. The piece was not, whatever Debussy may have said, “inspired” by Watteau’s voyage a Cythère; it is an account of his elopement with Emma Bardac to Jersey (hence the English version of “Isle” in the title) in 1904 (but of course Debussy couldn’t say that, he was still married the first Madame Debussy). The music depicts the boat that carried them there setting off – we even hear the ship’s horns as they leave the port – and the growing excitement and apprehension of the adventure the couple were undertaking, until the music, after getting faster and faster, finally sits back a little for a climax which reminds one that Tristan and Isolde consummated their passion on the approach to land after a voyage. In the performance at the festival, the tempo remained exactly the same, and I felt that they had not penetrated the essence of this remarkable piece. I’d much rather have heard Raineri play the original solo piano version.

The next concert began with Flood singing Let the bright seraphim by Handel. She has extraordinary clarity and flexibility, and more unusually for a coloratura soprano, a very wide dynamic range which can hold its own with a trumpet, played here without self-effacement by Tetsuya Lawson. She was accompanied by strings but without continuo, which meant that from time to time the music was down to just two lines, her and the bass, with no harmony in between. The audience of the Northern Rivers is used to historically informed performance of baroque music, in the hands of the likes of Margaret Connolly, Bridget Crouch, Austral Harmony… and was not impressed by this. I know how difficult it is to find an actual harpsichord or chamber organ – but isn’t there plenty of other music to sing?

One of the great things about the Bangalow Music Festival is the wide variety of ensembles presented in each concert. This really gives sensory variation of the kind that you get in a well-balanced dinner. The Handel was followed by David Requiro and Meta Weiss playing Variations on one string for two cellists, by Paganini, which I had never heard before. They played absolutely as one, the melody passing seamlessly from one to another, and Weiss displaying a truly astonishing range of harmonics in the process. What a showpiece this was. Then the Festival string quartet, which joins the SXS for the Bangalow Festival, played a string quartet written by the young Puccini, which was also unknown to me.

The most arranged piece in the festival followed. This was Rotar’s orchestration of Brahms’ Four serious songs, which he preceded, interspersed, and followed by short passages of music commenting on Brahms’ original. In these Rotar showed a wider range of orchestral palette than in his other arrangements, and if I say they sounded more like Mahler than Brahms then perhaps that is a compliment. The songs were sung by Teddy Tahu-Rhodes, whose magnificent voice carried splendidly over the often stentorian textures of the arrangements, and was altogether another of the tours de force of the evening. Yet I felt that in this vast sound much of the intimacy of the first three songs was lost, the introspection that Brahms retreated into at the end of his life. “All is vanity…men are no better than cattle…oh death, how sweet you are” say the songs. At the risk of sounding like a boring old traditionalist, I’d say, in the end, perhaps better not arranged.

And we still hadn’t finished the first evening! Violinist Amalia Hall came on a played Ravel’s Tzigane. In this, another ridiculously virtuoso piece, Hall hypnotised her audience with her spell-binding performance. What chocolatey low-string playing! What gossamer lightness up high! And such a compelling sense of rhythm. Even in the galaxy of stellar performers assembled for this festival, she stood tall.

The Bangalow festival has for some time included a concert performed by promising young players, and Saturday’s series of concerts began with one of these, which I did not hear. The concert that followed was a model of what is possible with such an interesting combination of musicians. It began with the Festival Quartet’s performance of a whimsical one-movement piece by the American composer Caroline Shaw, and moved straight into one of the highlights of the weekend, Poulenc’s Sextet, for wind and piano, in which the Southern Cross Soloists were joined by bassoonist Matthew Kneale. I have never seen such an active and engaged bassoonist. All of the ensemble knew this piece really well, but Kneale practically danced his way through the music, taking his partners from around the ensemble as one of them either responded to the bassoon part or played together with it. The work, written when Poulenc was emerging from his earlier phase of somewhat piss-taking music into one where he looked with sorrow and perplexity at the state of the world around him, contains some of his finest music, and this performance truly penetrated all aspects of his utterance. This was followed by a high-spirited rendering of one of Mendelssohn’s best pieces, the Octet for strings. This was all the more enjoyable by having been preceded by music for wind and piano – a truly excellent piece of programming.

In the afternoon we were treated to a concert called Odyssey – a journey of music and dance through time. This was a long series of twentieth and twenty-first century pieces, interrupted by four from the baroque. Of these, the most delectable were Amalia Hall’s andante from Bach’s second solo violin sonata, and David Requiro’s response to this, the prelude to the 3rd cello suite. Some of these pieces were danced to, in a post-Martha-Graham way, by Rebecca Hall and Riley Baldwin. I would not rate myself as an expert on dance by any means, but few of their acts convinced me. The opening number, George Crumb’s An Idyll for the Misbegotten, began promisingly enough, but they didn’t seem to have enough variety of things to do to flesh out the imagery of the music. And when Baldwin danced to the Bach cello suite, he portrayed it as a technical exercise, going through what looked like a series of warm-up movements. Only in the beautiful erotic scene which accompanied two movements from Arboreto Salvatico by Giovanni Solima did the audience really feel involved.

Saturday evening’s concert was devoted to opera, and led by Alexandra Flood and Teddy Tahu-Rhodes, and was apparently a very bubbly occasion, but I went instead to a concert in the next town given by The Spooky Men’s Chorale and a local pseudo-Russian choir, Dustyesky (yes you read that right), which was brilliant and funny – but I am not reviewing that here. I returned to Bangalow on Sunday morning to hear Tania Frazer play the Strauss Oboe concerto. How anyone can organise a festival and then just sit down to play possibly the hardest piece in the standard repertoire for oboe, I don’t know. Although the first movement was perhaps not quite as relaxed as I like it, the second and third movements were nothing short of perfection. This, like some other larger-scale offerings of the Festival, was conducted by Sarah-Grace Williams with competence, which blossomed into something much more engaging with her interpretation of Iain Grandage’s The Wild Geese, which followed. The concert included Requiro, again sublime, in Dvorak’s Silent Woods, and concluded with a work far too infrequently heard, Weber’s Clarinet quintet. The applause after Ashley Smith’s magical pianissimi and unbelievable flexibility in this work was deafening. What an artist he is!

In the end, through a varied and at times riveting program, what I took away from this festival was the sustained excellence of its performances. So it was fitting that the festival program included conversation between Edric Ayres and the two wonderful singers. This was entirely informal, and they sang some party pieces – Flood’s Mac the Knife in both German and English, and Tahu-Rhodes’ Oh Shenandoah. Ayres’ urbane and informed questions elicited some great stories from both of them, and went a long way to bridging the gap between audience and performer.

The Bangalow Music Festival is a jewel in the classical-musical life of the Northern Rivers. Long may it continue.

Ash Grunwald | NORPA
Intimate and interactive, Ash Grunwald showed us a small part of what he is made of, musically. Ash has written a book ‘Surf by Day, Jam by Night’ and has also, with his wife, created Earth...