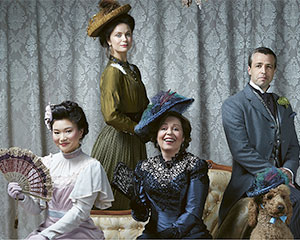 Written in 1865, An Ideal Husband is reputed to be produced almost as often as Oscar Wilde's other heralded masterpiece, The Importance of Being Earnest. Adding some additional weight to the argument, MTC associate director Dean Bryant delivers an incredibly good production.

Instantly a visual treat, set and costume designer Dale Ferguson has invested heavily to ensure the production looks and feels elegant. While simple drapery and period furniture beautifully evoke the rooms of opulent homes, the production costumes are worthier of note. Finding inspiration in the portraits of a 19th century artist, Ferguson and assistant costume designer Sophie Woodward were aided by an expanded wardrobe team to create rails of truly beautiful garments that aroused moments of audible approval.

Possible only from a company enjoying good financial health, Melbourne Theatre Company is doing what we absolutely expect – great plays in solid hands showcasing the finest we have on theatrical offer and; on offer here are some impressive performances from a very strong cast.

Central to the play's moral questioning and more serious in tone than the wider witty commentary on the sexes and classes, Simon Gleeson is excellent as Sir Robert Chiltern. The good, apparently lacking in so many husbands, is plentiful here as are the glimpses of someone capable of extremely poor judgement. Like the playwright himself, Gleeson solidly depicts a man struggling with secrecy and the fear of exposure.

In glancing at source material, Wilde’s descriptions of character are often as amusing as the lines he has written for them – highly probable at the time of writing were particular actors in mind but over a century later, it amuses somewhat to see enormous presumption about a director’s ability to cast with such accuracy. In the case of Mrs Cheveley however, Christie Whelan Browne is a triumph. ‘Tall and rather slight – in all her movements she is extremely graceful’

Miss Whelan Browne could so easily have been cast in several roles here and I have no doubt whatsoever of them being realised superbly, but to have overlooked this casting opportunity, would have robbed us of something quite exceptional. Adorned in the finest of afore mentioned costumes and conjuring a persona of beauty, wit and confidence, this is a powerfully mature and intelligent performance that shatters elegance with class and venom.

On absolute par with Jennifer Saunders’ recent turn as the Duchess of Berwick in London, Gina Riley is ovation worthy outstanding as Lady Markby and edging ever closer toward national treasure status. So strong is Riley here that I remain convinced of her capacity to name the note of her every syllable. This vocally hilarious, sharply observed performance is pure pure pleasure disappointing only in that she makes no appearance in the evenings second half.

Vocally booming and seemingly jumping in where Lady Markby left off is William Mcinnnes as The Earl of Caversham. With impeccable delivery and timing, it’s a privilege to see this fine actor taking aim with such brilliant dialogue.

In general, the work and calibre of all on stage is resoundingly high. Brent Hill is delightfully dandy as Lord Goring, Michelle Lim Davidson is evidently thorough in her pre-show vocal exercises and Zindzi Okenyo is solid as Lady Chiltern. The play offers up some brilliant character opportunities and Josh Price deserves a shout out as thanks for some very funny moments.

Relevance will be a significant factor in the season choices of any theatre company. As a tale of political power mongering, deception and shady pasts, hearing words that feel as potent now as they were when they were penned, we can only marvel at such astute observation. While Oscar Wilde could not possibly have foreseen our current, more rapid ability to distribute scandal, filth and gossip, enduring indeed is his insight into our motivation for such active participation.

Prophetic in its claim that “Sooner or later we have all to pay for what we do.” Wilde’s classic work is alarming as an allegory for our current political climate; let’s hope the fruition of this prediction for some of our current players is imminent.