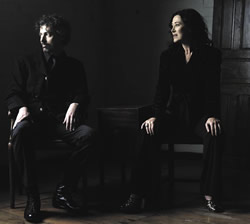 For whatever reason, some Shakespeare plays are easy to do badly; I’ve seen several leaden Lears, a couple of horrendous Hamlets, and my fair share of very ordinary Othellos. Generally speaking, however, Macbeth is one of the plays that’s fairly resistant to dull interpretations. This made me all the more disappointed to leave the Bell Shakespeare Company’s latest production feeling let down.

It feels heretical to speak ill of director John Bell (a great theatrical hero of mine), but given the reliably excellent Bell Shakespeare stable of actors, it is difficult not to suspect that much of what is wrong with this production lies with its direction. To be fair, the production has many good scenes and was overall a perfectly solid rendition of the play, it’s just that I expected more from this great company and so seasoned a director.

The production employed a style of staging whereby almost half the usable space was taken up with junk-cluttered zones at either end, purposely forcing all of the action into a small area in the centre that seemed no more than a few meters squared. Meanwhile, actors not immediately involved in the action remained visible by sitting in these onstage “wings”, a bit of Brechtian alienation technique that seemed designed, along with the flat, almost featureless set, to draw all the focus on the actors themselves. While I applaud this choice to bring the ensemble’s performance quite literally centre-stage instead of relying on production gimmicks, this decision requires the show to be extremely dynamic, but unfortunately this production didn’t consistently rise to this challenge.

Some scenes were very good, however, such as Banquo’s gory phantom sending Macbeth into a paranoid rage, the despot’s second meeting with the Witches, and the massacre of Macduff’s family, followed by a chilling (and rather cinematic) hard-cut to Macduff and Malcolm's exile in another finely-executed scene. Yet between these high points the play lagged and lacked punch, never more so than at its unfortunately tepid ending. Macbeth’s fatalistic line “Yet I will try the last” is usually a cue for at least a few rounds of savage mano a mano, but here the tyrant simply gets shot in the face in a thoroughly anticlimactic fashion.

Although no one’s performance was less than thoroughly solid, the production lacked a necessary vitality to justify these stark staging choices.

When it comes to Sean O’Shea’s rendition of Macbeth, my feelings are similar to those about John Bell’s direction. Frankly, I’m quite a fan of O’Shea; his Trotsky-esque Cassius in Bell’s excellent 2001 production of Julius Caesar was a revelation, bringing a sympathy and ambiguity to a character I’ve only ever seen portrayed as an outright Machiavellian figure either before or since. So I was really looking forward to his take on Shakespeare’s great conflicted villain.

Perhaps this criticism is then a little coloured by disappointed over-anticipation. In some scenes he was excellent, it’s just that his performance was in some ways emblematic of the whole production; great in parts but lacking a cohesive energy. O’Shea’s Macbeth seemed to embrace his villainous side almost instantly, so much so that it then seemed absurd that when his wife later suggests the regicide he drops to his knees, quaking in shock at the very notion. Although Macbeth is certainly a character at war with himself, O’Shea’s oscillations between slimy tyranny and fearful self-doubt, almost to the point of emotional breakdown, appeared extreme and failed to chart an arc one could follow. His performance was more consistent after interval, but unfortunately much of the character’s best material was by this point behind him.

Linda Cropper’s Lady Macbeth was a strong but uninspired take on the role, coming across as more of a bullying harridan than the more nuanced manipulating or cajoling wife one often sees, and thereafter her descent into full-blown guilty despair and madness came across as developing too suddenly. Richard Sydenham as Banquo also seemed somewhat bland, but made a striking return as the bloody apparition at Macbeth’s table. David Whitney turned in probably the best and certainly most visually-arresting Macduff I’ve yet seen; burly, bearded and resplendent in fatigues and long kilt, perfectly embodying the proud, bereaved warrior (which, given his pivotal role to the play’s conclusion, made this production’s limp ending all the more disappointing). Timothy Walter’s Malcolm was also especially good, as was Robert Alexander as Duncan and Michelle Doake as Lady Macduff. Reliable comic performer David Hynes got good laughs as the Porter and Matt Edgerton capably filled the usual messenger roles.

Bell Shakespeare’s latest Macbeth is quality theatre, but it is something of a disappointment given the luminaries involved.