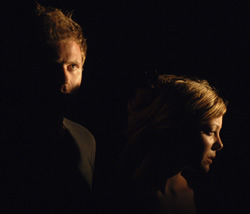 Red Stitch’s Hellbent is an adaptation of the seventeenth century play The Duchess of Malfi by John Webster. It’s a revenge tragedy, a hysterical melodrama of Shakespearean proportions served up with an extra dollop of nastiness and it’s wonderful.

‘What would it pleasure me to have my throat cut with diamonds?’ The beautiful, young Duchess of Malfi has just become a widow. Her brothers, the corrupt Cardinal and the incestuously-inclined Judge, want her to sit at home decorously knitting (or whatever it was that ladies in the 1600s did to fill in their time). The lusty Duchess, however, has her eye on her handsome steward, Antonio, a man who can never be her social equal. She woos him and secretly they marry. But, when she has a child, her brothers start hearing rumours and from then on everyone is irrevocably hellbent.

I loved this. John Webster had a penchant for sensational violence that would not be out of place in many of today’s horror flicks, but also the ability to write language beautiful enough to thrill any lover of the classics. Red Stitch’s Hugh Coleman and director Ailsa Piper have pared down the original play into a tight six-hander performed on a tiny, empty stage. The costume and lighting design is effective without being fussy, so this is theatre that lives or dies purely on the cast’s ability to deliver. And the rather claustrophobic space of the Chapel St Theatre seemed almost ready to burst with the action and energy of a story that, in the hands of this talented cast, still works beautifully 400 years after it was written.

Kate Cole is a spirited, dignified Duchess who shines in her heartbreaking death scene. She is well supported by Verity Charlton who plays the Duchess’s naughty but noble companion, Julia. The men are excellent too. Nicholas Coghlan is a suitably fetching and likeable Antonio. Felix Nobis and Dion Mills are wonderfully venal as the two hideous brothers and Simon Wood is impressive as Bosola, the sourly-humorous malcontent who can’t seem to stop himself from doing everybody else’s dirty work.

Red Stitch Theatre produces exciting, quality theatre on what is no doubt a shoe-string budget. Hellbent will run for almost a month so, if you have the chance and you are looking for a satisfying theatre experience, treat yourself to a ticket.