The privilege of watching the thrilling skill, precision and exuberance of the Sydney Dance Company palpably rippled through the audience on the opening night of Artistic Director Rafael Bonachela’s Ab [Intra]. It is a dazzling, virtuosic and unforgettable piece.

Previously performed here in 2018, this work has returned to Sydney following a tour of France, now with a few changes to the company.

Ab [Intra] is Latin for the energy transfer between the internal and the external. Rafael Bonachela describes it as “more than the external expression of internal concepts, in this dance sphere it is a representation of energy derived from these two facets of our worlds”.

This esoteric program note soon became profoundly clear. The production is characterised by a pull and push of movement and emotion, underpinned by the ebb and flow of Nick Wales’s tremendous score. Dancers and the score both move from the small and lyrical to the powerful and percussive, expressing inner tensions.

A light, smoky mist covers the bare stage at the beginning of the performance. Beginning with a single dancer, slowly the ensemble builds up into a riot of mesmerising choreography.

The entire ensemble then gives way to the first of several duets and trios in which the full sense of the work’s title is made very clear. The duality of the dancers’ internal and external energy is the emotional core of the first duet and, in different ways, the entire work.

The first duet is elegant, fierce and very beautiful. The dancers are both in synch and oppositional, shifting tone between tension and cooperation. The second duet is intimate, fluid and sculptural. In this less combative duet, the emotions are heightened by Nick Wales’s poignant cello and strings.

The times when the entire company is on stage are remarkable. Bonachela has the dancers sometimes moving idiosyncratically, then in unison for some utterly breathtaking sequences, acknowledging the fluidity between the individual and the group. All of it is executed with jaw-dropping precision.

Ab [Intra] is also characterised by powerful choreographic and musical dynamism. Driven by pulsating rhythms, cello and strings, the ensemble movements build with the score to muscular crescendos, which then diminish to make way for the next movement.

Minimalism is the overriding aesthetic of this production. David Fleischer’s set is a bare stage, and his minimalist costume design, in a palette of black, white and nude, leaves the focus entirely on the dancers.

Damien Cooper’s lighting design is restrained for the most part, keeping the dancers semi-lit through the mist. When he does use a lighting effect, it is striking and unexpected. There is a confronting moment when the mist clears and the company is lined up against the back wall under a glaring light.

Later, the use of lighting shining down from stage left, momentarily glowing beatifically on the ensemble, nods at the spirituality of the work.

However, it is the staggering skill of the dancers and the beauty of the choreography that will linger in audiences’ minds. This is an exceptional production, which was as well received in France as in Australia, and Sydneysiders are fortunate to have a second chance to catch it. 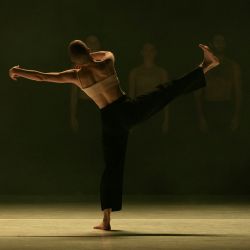 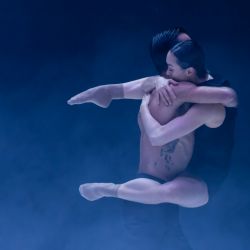 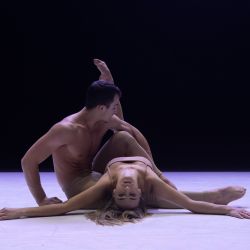 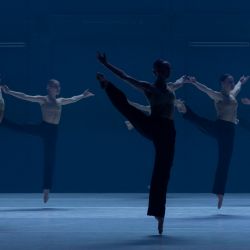