Following on from the success of its acclaimed premier season at London’s Old Vic Theatre in 2017, The Girl from the North Country transferred to the Noël Coward Theatre for a limited 12-week West End run with much of its original cast. A 2018 production at New York’s Public Theatre preceded the show’s Broadway opening in 2020 where it continues after a rude pandemic interruption, and now: Australian and New Zealand audiences are fortunate indeed that this remarkable show will be touring so extensively.

Set in Duluth Minnesota in 1934, The Girl from the North Country is a snapshot of troubled people enduring troubled times, gripped as they are by the Great Depression. With book and direction by Conor McPherson and using the songs of Bob Dylan, this powerful work is very much a play with music over traditional musical.

McPherson, with full access to Dylan’s extensive catalogue, has been meticulous in curating the right songs for the moments of his work and the necessary songs to speak for and from the characters he’s created.

While dialogue moves the story forward, it is Dylan’s music and lyrics that gives breath to McPherson's people. Having won a Nobel prize for literature, Bob Dylan very much sits within the tradition of the Great American song book and in using his words, there is greater dimension in these portraits drawn from America's grifters, drifters and underclass.

Dylan has been credited for singing songs like he means them, whatever they mean and, perhaps why they work so well here as they intersect with Connor McPherson's writing. Vignettes and glimpses of life and lives resonate deeply, aided by moments of uplifting musical beauty in a narrative that is far from uplifting.

Familiarity suggests that it’s a Long Journey into Night for Eugene O’Neil as John Steinbeck’s Mice and Men lie in the wings of anything by Tennessee Williams upon the stage of Dublin’s Abbey Theatre.

This unbelievably talented company is as wonderful and as passionate as the text, music and lyrics they’re delivering. Lisa McCune is well deserving of her marquee plaudits in a sensitive, unabashed and tragically funny role requiring a seriously big sing. Blake Erickson’s rendition of ‘Duqusesne Whistle’ was breath-taking and quite possibly gained applause from across road at Hamilton. Christina O’Neil singing anything at all would be an honour to listen to with her vocals the evenings standout. Elijah Williams and Chemon Theys are also incredibly worthy of a mention as is Helen Dallimore but, The Girl from the North Country truly is an ensemble piece with actors, musicians and actor/musicians sharing the stage to create a quite remarkable all.

If the purpose of a review is to recount an honest response to a work, this one must also come with a reluctant word of caution. The Girl from the North Country is a beautifully written and expertly assembled piece of theatre and this outstanding cast, an utter testimony to the extraordinary talent we possess in this country.

Having been blown away by the original London production, revisiting the show NOW feels very different indeed. While there is little to distinguish the two productions, what does separate them unfortunately is time. Given we are now emerging from our own incredibly dark period, as wonderful as this show is, there is a risk that those seeking or needing a more jovial end to their evening may find themselves disappointed. Given how incredible this show is, to not enjoy it fully was an inconceivable concept in the ‘before times.’ 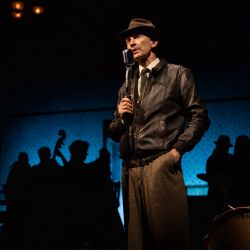 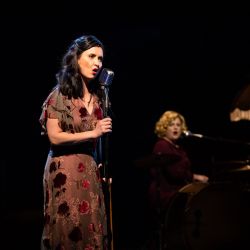