Common Ground[s] opened the program. It is a duet for Germaine Acogny and Malou Airaudo, two dancers in their seventies with close connections to the late Pina Bausch. It was like a gentle autobiography of their companionship through the world of contemporary dance, in the wake of Bausch. Their movements were subtle, slow, and concentrated, as they went about simple domestic tasks that might have had their origin in either Africa or Europe. The music was suitably simple, mainly guitar and pizzicato strings, never loud, often silent.

Malou Airaudo danced the role of the sacrificial victim at the end of the Rite of Spring in Pina Bausch’s original production of the Rite, first staged in 1975. On stage, the sacrificial victim dances herself to death. A few hours after this show I attended a play called Juliet and Romeo, about what might have happened if Romeo and Juliet hadn’t died in the vault of their ancestors but had gone on to live “normal” married lives. I reflected that common ground[s] was just such a piece – the sacrificial victim didn't die, but went on to work with a brilliant colleague, Germaine Acogny, who founded an African dance school, L'école des sables in Senegal.

This gentle piece preceded the Bausch Rite of Spring, and I was reminded of a Chopin recital I attended years ago by Roger Woodward. He played nine mazurkas very softly, gorgeously, meltingly, and in the interval I marvelled at this from a man who had a reputation for playing so violently that there was often blood on the keys. But that first half of the concert was played so softly in order that the fury Woodward unleashed on the B minor sonata would be all the more devastating.

Being in the presence of this performance of The Rite of Spring was completely overwhelming. Stravinsky’s masterpiece, certainly the greatest ballet score of all time, danced by West Africans trained in Germaine Acogny’s Ecole des Sables in Dakar, Senegal, to choreography by the legendary Pina Bausch – we were in the presence of something so vibrant, with such an extreme of raw sexual energy, harnessed and honed with such skill and dedication by every member of this amazing dance troupe to fit into the half-hour of Stravinsky’s masterpiece… Unbelievable.

The music was not played live, but was a recording of Pierre Boulez’ 1947 performance with an American orchestra, remastered, and iterated by the fabulous sound system in Her Majesty’s Theatre in Adelaide. It is not as clear as some much later performances, but it has a sweep about it that made it just right for the utterly compelling dancing of L’Ecole des Sables.

The theatre blackout slowly gives way to dawn with the opening bassoon solo in its highest register, a sound unlike anything in a conventional Western orchestra. It is the dawn of the day of the sacrifice. A woman lies on her first menstrual blood, a red cloth that also does duty for the loss of virginity, a central theme of this work. Women rush excitedly onto the stage, at first singly, then in a pack. They quiver with anticipation, and a little fear. Every movement comes as a response to the score – indeed, throughout the performance every detail of this enormously complex score was reflected in the dancing.

Then with the powerful thumping of savage chords, the man-pack pounces onto the stage. Naked from the waist up, their movements and their very bodies steam with male adolescent sexuality. Sweat pours off them.

They move among the women dancers (who are still excited and a little fearful) with all the attitudes of male adolescent desire, from worship to rape, from extreme tenderness to extreme violence. The women offer their blood to them nervously – and then withdraw. And finally one of them, dressed only in the piece of red cloth, dances herself to death.

“If you are not exhausted at the end, you haven’t danced it properly”.

The audience left this performance completely dazed. They had felt their own adolescence, never expressed in their own lives because of a plethora of cultural inhibitions, exposed for the first time in a way that was beyond confronting – inescapable, visceral, ineluctable. 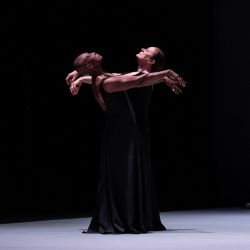 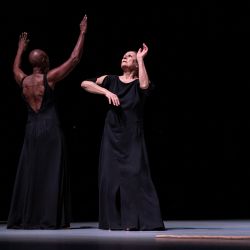 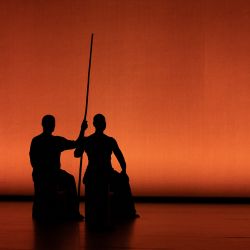 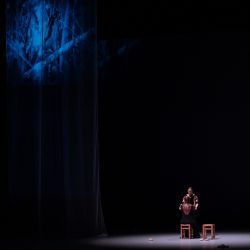