Spectacular, Spectacular, Moulin Rouge! The Musical! has finally arrived in Melbourne after much anticipation. The musical based on Baz Luhrmann’s 2001 film is an all-out extravaganza of kitsch, camp and colour that will delight audiences of all ages.

Including an updated playlist of pop music, Moulin Rouge! The Musical! takes inspiration from the movie with an upbeat soundtrack of dance pop anthems and original music from the film. Featuring Alinta Chidzey as the Sparkling Diamond Satine, the role fits this superstar of musical theatre like a diamond encrusted glove. After appearing as Velma Kelly in Gordon Frost’s Chicago and Anita in West Side Story, the story of tragic heroine and bohemian courtesan Satine allows Chidzey to flex her triple threat talents.

Joined by Des Flanagan as the hopelessly romantic Christian, a naïve writer who sails from America to seek out the bohemian ideals of truth, beauty, freedom, and love, and finds so much more in the Latin Quarter of Paris, Flanagan brings a gentleness to the fast-paced production.

Christian’s new friends the artist Toulouse-Laurtec (Tim Omaji) and Santiago (Ryan Gonzalez), lead him into the seedy underbelly of the Moulin Rouge and provide significant grounding to a production that could easily get lost amongst the feathers and glitter.

While the story doesn’t differ from the film version, the updated song list including Katy Perry, Lady Gaga, Beyonce and Sia is a nod to the original concept of using pop music in a musical but adds little to the narrative other than a wry smile of recognition from the audience.

The set is something to behold however, the moment you enter the completely remodelled Regent Theatre, you are swept away into a luscious world of red velvet, blue elephants and all the razzle dazzle you could dream of. It is a return to the big budget, lavish musicals where the visuals are as impressive as the talent on stage.

Moulin Rouge! The Musical! is a thrilling ride of bohemian ideals under a lavish diamond sky, a place where you come to play and be entertained by the very best in the biz. Simon Burke AO as Harold Zidler runs the show and is a ball of energy that cannot be contained. Alongside him is the on-point portrayal of The Duke by Andrew Cook who manages to be both awfully vindictive and exceptionally pathetic in his treatment of Satine and the other bohemians.

Moulin Rouge! The Musical! is a massive undertaking and a true ensemble piece of theatre. The 34+ cast members are all high kicking, can canning and singing throughout the three hours on stage and there is rarely a moment of calm.

While the ending is tragic, it is difficult to end such a high energy production on the death of its heroine, and the return to the classic Labelle tune Lady Marmalade mash-up with the CanCan ensures the audience leaves on a high.

Moulin Rouge! is a show about resilience, about how “the show must go on” even as our heroine is dying, she insists on performing one last time. After two years of delays, cancellations and uncertainty, Moulin Rouge is the musical that champions the resilience of the arts industry and does it with so much decadent style, you would never know how hard its been. That’s the beauty of showbusiness, it’s all smoke and mirrors and it’s all for your enjoyment. So, step into the Moulin Rouge, like Cabaret before it, leave your troubles at the door, and join the wonderfully over-the-top lavishness of Moulin Rouge! The Musical! 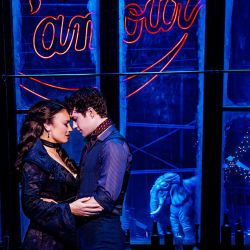 Stravinsky’s Ballets | Melbourne Symphony Orchestra
It is an amazing tour de force to perform all three of Stravinsky’s early ballets in the same concert. A tour de force for the conductor, for the orchestral players, and for the audience. It is...