It is remarkable in that it is only 125 years ago that the amazingly outrageous (to our sensibilities now) prejudices and closed-mindedness about women and their abilities prevailed in “polite” British society and academia. And it is timely in reminding us that these discriminatory attitudes and behaviours are still not very far below the surface of today's social, political and academic interactions.

Blue Stockings starts and finishes in a railway station, and in between, there is a fascinating journey of discovery, struggle, humour, outrage, acceptance, frustration, courage and disillusionment, brilliantly acted by a perfectly chosen cast. It is indeed fortunate for Brant Eustice, for example, that rotten tomatoes and eggs were not available to the horrified audience when he so convincingly delivers the astounding actual speech by the abhorrent Dr Henry Maudsley about his detestable views of the physical, intellectual and emotional limitations and the proper place of of women. (One can only hope that the modern psychiatric hospital in London that bears his name has not retained any of his views). Kate van der Horst shines in the central role of Tess, and Kate Anolak is suitably imperious and compassionate at the same time as Mrs Welsh. Throughout, the acting from this large cast is faultless.

In addition to their acting, this cast also manages a large number of well coordinated scene changes, so that the simple set by Kate Prescott, with the sensitive lighting by Richard Parkhill takes us from a classroom, to a garden, an orchard, tea rooms, library, office and more. The scene changes are each appropriately identified on the chalk board as part of the choreographed process.

While it tells the story of the struggle of this group of young women for recognition of their studies (which didn't finally come for some 50 years!), this play addresses a range of dilemmas and emotions, through the various passions of various protagonists for learning, for tradition, respectability, change, recognition, choice, knowledge, and particular principles – shakeable or un-.

While there is much to applaud about this performance and production, it shows us that, particularly in the light of recent discussions about the treatment of and respect for women, we still have a way to go as a society. 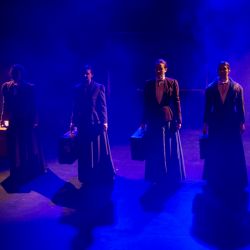 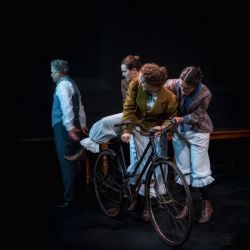