With Andrew Llyod Webber in a feline frenzy getting Cats to the stage, his lyricist collaborator on Jesus Christ Superstar and Evita was determined to see his long-held desire to write a musical about the Cold War come to fruition.  In late 1981, Tim Rice met with Benny Andersson and Bjorn Ulvaeus and the match for Chess was struck.

As had proved successful with previous musicals, in 1984, Chess was first launched as a concept album. The critically acclaimed work secured a string of top 10 hits around the world. It would be a further two years until the musical made it to the stage in London and another two beyond that to make it to New York.

An allegory for the lengthy spat between the United States and the former Soviet Union, in the process of crossing the pond from the West End to Broadway, a multitude of storyline and musical changes were made to the work, however, unlike the London production which ran for over three years, despite some positive critical response and award nominations, the New York run was a disaster and closed after only a few months.

Nearly 40 years after the release of that original concept album however and perhaps with a little nudge thanks to “The Queens Gambit”, Chess continues to command an audience and remains an astounding and much-loved musical.

And so, to this latest Australian incarnation from Storyboard Entertainment that kicked off a national tour at Melbourne’s iconic Regent Theatre.

Clearly stated in the program notes from the Producer is a desire to hear this magnificent score as close to the original concept album as possible and on offer here is a 26-piece onstage orchestra and an abundance of pre performance keyboard and drum programming to ensure a faithful replication of that original studio work. From the Director’s notes – a desire to once again tackle the book in yet another endeavour to deliver a less convoluted story.

Checkmate to the Producer.

The narrative uses a Chess tournament between Russia and America as an allegory for the Cold War. It is at times clever, somewhat flimsy and still remains a little confusing. There’s some history, some politics, some commentary on the corporatisation of sport, lots of plotting, planning and espionage and even a bit of partner swapping.

But who cares, because the score of Chess is glorious!

And how could it not be? It was written by the blokes from ABBA for goodness sake and quite frankly, it’s the succession of wonderful songs that people will predominantly be coming along to hear and so, rightly or wrongly, the plot feels secondary.

This semi-staged production features a genuine roll call of theatrical clout and they’re all really good, but for a show that sports some of the most sensational, ‘looking forward to that one’ songs for women, sorry ladies, on this occasion, the boys stole your thunder.

Bringing some fabulous jumpsuit glamour and intelligence to the role of Florence is Natalie Bassingthingwaighte. Chess is a seriously big sing and Florence does a lot of the heavy lifting. This was a really solid and character considered performance but there was perhaps a little too much weight on the bar at this workout. In iron curtain opposition, Paulini was suitably icy as Svetlana and her rendition of 'Someone Else’s Story' impressed. In a power suited gender switch, Brittanie Shipway was seriously good as The Arbiter. Controlling proceedings with confidence and a knowing smirk, vocally, she was by far the strongest woman on stage.

From the boys dressing rooms came a lot of might. From his very first entrance, Mark Furse as Freddy claimed his space and belted through the evening with clarity and strength. With powerhouse vocals and an impressive commitment to character, Furze seriously delivered and brought 'Pity the Child' in particular, the satisfying and dramatic guts it warrants. As Molokov, Eddie Muliaumaseali'i was a powerhouse of bass baritone class and an utter pleasure to listen to, and as Walter, Rob Mills gave us a good dose of white suit shifty. Without question, the standout performance and performer in this production is Alexander Lewis as Anatoly. Perfectly stoic, proud and Soviet dour in bringing the Russian to stage, Lewis was simply astounding with his spine-tingling delivery of ‘Anthem’ worth the ticket price alone. Lewis is dream casting and utterly astonishing to listen to throughout, but his strength here did unfortunately highlight the chasm between the good and the extraordinary fostering a sense of disappointment in the production’s uneven standard.

But the joy of Chess is of course the music, and on that front alone, this production exceeds any possible expectation. What a privilege to experience the sheer wall of sound from a stage full of musicians, a choir, and a very busy, hardworking and hugely talented ensemble.

There really is so so much to be enjoyed here. 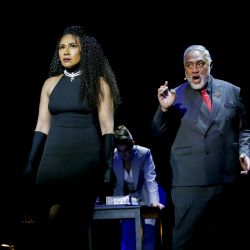