Plaudits all round for this marvellous production. Firstly to the producers Trevor and Katrina Patient, who brought together this impeccable team, including Musical Director Joe Louis Robinson, Director Drew Anthony and Associate Choreographer Para Isidro.

This is a show that ticks all the boxes. The set, a white grand piano on raised dais, a curving staircase leading up to a full cross stage balcony. An alcove beneath for the for the excellent 10 piece orchestra. Large mirrored screens slid across to transform the set into rehearsal and audition rooms. Huge projected images on the backdrop transformed the scene into Tenterfield, or a New York skyline or simply focussed in on the artist centre stage at the time. A blessing for the audience in the upper dress circle.

Ethan Jones shone in the role of Peter Allen. Predictably lower key in his earlier years, he relished the high camp double entendres portraying a more mature and highly successful performer. Young Peter Allen was played with panache by Lucky Farrell, who set the scene in country NSW, encouraged by his adoring mother Marion, Casey Edwards, to perform at the local pub. Marion Woolnough makes frequent reappearances in the stage life of Allen, she was outstanding in her exquisite rendition of Don’t Cry Out Loud.

The role of Judy Garland was impeccably performed by Lucy Williamson, her spoken voice and all her sung numbers were fabulous. The role of her daughter Liza Minnelli is played by Elethea Sartorelli whose show highlight, for this critic, was the poignant I’d Rather While I’m In Love.

Greg Connell the long-term lover and partner of Allen was played by Peter Cumins with reserve true to his role, but finished with a heartbreaking, perfectly-timed farewell solo I Honestly Love You. The Angels, a trio of honey voiced girls, Melissa Erpen, Carrie Pereira and Sophie Foster, made multiple appearances in the show and were terrific in their solo songs and as backing singers for numbers by Ethan Jones.

Solidly supporting the main artists were a great ensemble of singers and a brilliant cast of dancers. The demanding group choreography was performed in excellent step and full of flair.

One absolutely outstanding number which had the audience baying for encores was the dazzling performance by Peter Allen and the Rockettes at Radio City. Another was the perennial favourite I Go to Rio, just a riot of colourful costumes and vibrant moves.

I could say the night belonged to Ethan Jones and truly he was barely offstage and worked his heart out, but I must declare that this was one of the finest pieces of collective ensemble works seen for many years in Perth, and not only that, with a largely local cast! 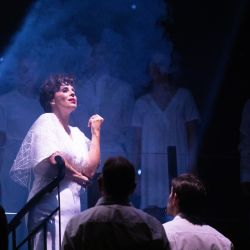 We Belong(ed) Together: The Rickie Lee Jones Story
Once We Lived Here | Western Sky Theatre
Randy’s Anti-Crisis
You’re Welcome for the Music | Chiquitita & Fernando
The Book of Mormon