The cruise line industry has been one of the most affected industries in the world during the COVID-19 pandemic. From the disastrous situation with the Ruby Princess in Sydney to news of crew members stuck at sea for months on end with no clarity on when they can return home and some taking desperate measures in these unprecedented circumstances. This week, I chat to professional dancer, Kearna Philpott who was on board the RCCL Spectrum of the Seas when the pandemic began.

Hi Kearna, you’re a dancer on an international cruise line, how has COVID-19 affected your work?
It’s majorly affected my work, obviously the cruise industry is down at the moment and not running any cruises which means as a dancer I’m out of work.

Were you on board when the pandemic began?
We were actually in China at the start of the pandemic. On the 27th of January our Captain made the call against company orders to not take on any more guests. At the time we didn’t know how bad the virus was and the impact it would have on the world. think we got really lucky because during the cruise beforehand, we hadn’t allowed 500 passengers from Wuhan onto the ship. We sailed away from Shanghai without guests and for the first time in our Captains’ 28-year career, he didn’t know where he was sailing to.

From Shanghai we did a 14-day quarantine on board and cleaned that ship to within an inch of its life! We cleaned our rooms, the theatre every night as well as backstage, and the housekeepers took all the mattresses from the rooms and cleaned everything. There wasn’t an inch of dirt left! What was really wonderful though, was that because there were no guests on board, we were able to use the guest facilities, the eating areas, guest elevators (sounds ridiculous but it was amazing!)

We were able to get off in Japan right before they shut their borders, from then on, every port wouldn’t allow us in. The Philippines allowed us to refuel but not stay overnight which is when the captain made the decision to come to Australia because at that time Australia was the safest place to be.

With no guests onboard, what did you do to pass the time?
Heading to Sydney we got to have all the privileges of guests onboard the ship. During those 30 days spent sailing the East China Sea and given we hadn’t had much time off the boat, Royal Caribbean provided us with free Wi-Fi, hosted crew parties, gave us activities and there was even a big scavenger hunt around the whole ship. We were basically given the ship as a big toy. It was amazing, we were treated so well. At that time, we thought we would be heading back to Sydney to do a few cruises and then sailing back to China.

We got to perform shows for the crew as well which was amazing. A lot of the crew don’t ever get to see our shows and it was one of the best experiences ever, seeing their faces light up and knowing that we were giving them some entertainment to try and take their minds off what was going on.

Once we got to Australia, we did three little cruises for the Australian bushfire first responders which was incredible and so wonderful to be able to give back to our country. After we said goodbye to those three cruises is when the virus hit the world really badly.

Were you in Sydney at the same time as the Ruby Princess?
We docked the day after the Ruby Princess in Sydney and at that point no one knew how bad it was and that the Ruby Princess had gone and infected all of Sydney. That was pretty scary, we were off the boat in Sydney and we were called back in an emergency to get back on the ship and quarantined. There was a man waiting in a massive hazmat suit who had to quarantine our bags and our feet and that’s when it hit us how serious and scary this was.

How much preparation goes into putting on a cruise ship performance?
We spent two months training and rehearsing these insane shows in Miami. These are some of the newest shows and newest ships at sea, and these shows are simply phenomenal. We’d worked our asses off 6 days a week 8 hours a day in Miami and once we got on the ship, it took almost as long to install the show in the theatre.

The media has been quite critical of the cruise ship industry, what do you think of the reaction to cruise ships and the treatment of its passengers, cast and crew?
It makes me so sad and frustrated and angry. I know the Ruby Princess really did stuff it up for other cruise ships, especially in Australia. The media seems to assume that every ship is like the Ruby Princess, or every ship has been infected. In reality the crew clean the ships more than anywhere in the world. It just makes me sad that currently there are crew members on a ship right now that have not had any cases of coronavirus but have not been allowed off the ship. Some of my friends have been onboard for 80 days and in some instances confined to their cabins. Luckily most of my friends have balcony’s now but when this started some of them were stuck on deck zero, which is under the water where there are no windows, no fresh air, no natural light. You can only imagine how what that could do to someone. I’m very upset with the media, and very upset with the government too, with every country whose government is not allowing their crew members the human right to get home to their families in this crazy time.

Can you describe the everyday levels of cleanliness normally upheld on a cruise ship?
The normal process is to make sure everything is clean, because something like gastro is so contagious and that’s such a concern. Luckily the standard on Royal is so good and they have such strict procedures in place. Cruise ships are the cleanest places on earth. Even before a pandemic. We always wash our hands and stay clean so that infections like gastro and others aren’t passed around.

How do you feel the arts industry as a whole is coping at the moment?
It’s struggling. I feel for it. As artists we feel so much all the time, so having something like this has a huge impact. I’m seeing gigs and band tours being cancelled, theatres that have had to close their doors and really negative implications. However, it’s really cool to see that in times like this, people are turning to the arts, watching Netflilx and movies to keep themselves sane. It’s positive that we are still able to provide for our communities in this way, but I definitely feel that it’s going to take a lot for us to come back from this.

Do you believe the arts industry will “bounce back” at the end of the crisis? In particular the cruise industry which has been hit really hard.
The cruise line industry is a very expensive industry and if they’re not making any money right now, the cost of just having ships just floating around the ocean is unimaginable. The cruise industry is a massive part of the economy so I feel it will bounce back. People love cruising, I know it’s going to take a while for people to be okay to be in large groups again, but I have full belief Royal and the a few of the bigger companies will survive this.

I spoke to our Captain on the Spectrum of Seas and he was saying he hasn’t seen anything like this since 9/11. It was an extraordinary comparison. People are scared to be together in groups where things can go wrong. There’s a lot of fear, which is understandable, but I believe it will pass and the cruise industry will kick back in and I’ll have a job again!

How are you keeping positive during this isolation?
I’ve been riding the waves. It’s been a really great time for me to take some “me time”. I’m an extrovert as a human being so I love to be around people. This has forced me to be quite uncomfortable and to be with myself and my own thoughts a lot. I’ve been reading, colouring in, and doing meditations on the headspace app. Those things keep me calm and allow me to focus on being present, and in the “now”.

What are you looking forward to most once the lockdown restrictions are eased?
Oh my god! Hugging my friends! I’m so excited! There are so many people I can’t wait to see. It’s hard to be home when I’m meant to be on the other side of the world dancing. I’m so grateful to be with my family at this time, but it’s so awful not being able to see anyone! I’ve been away for seven months and I haven’t seen anyone for so long, so coming home is a big tease. I want to see all my friends and extended family, but I’m also looking forward to getting back on that cruise ship and travelling. Obviously getting paid to do what you love and travel the world is phenomenal, but it’s the travel which makes my soul feel alive. Heading back out there on the ocean and seeing some beautiful places is something I cannot wait to do. 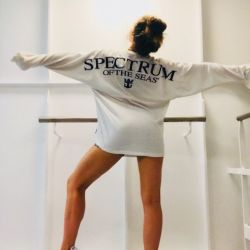 Even though Jagged Little Pill – The Musical is based on the album of the same name, it is as far from a “jukebox musical” as anything could be.