Diaspora | Chamber Made and Robin Fox 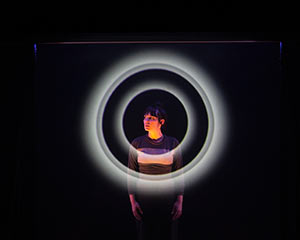 Diaspora offers the audience a vision of a distant imagined future and wow, what a vision it is!

Diaspora draws inspiration from the late 90s novel of the same name by author Greg Egan. The novel is a high concept hard sci fi set in a future in which humanity have en masse uploaded themselves (or “verselves” in the post-gender linguistic conventions of the novel) into pure data form. Any show based on that source material would be trippy but in the hands of Fox and Chamber Made it is a journey into another world.

From the opening image of a rolling sea created with light and smoke, Fox’s mastery of lasers is on display. Then the first hologram appears and things escalate into the best kind of weird. The technical wizardry at work is astounding. Images of light spin seemingly in mid air. A hovering brain evolves before your eyes, visceral images writhe with eerie beauty, intricate patterns twist like visual representations of deep mathematic lore, shapes form from chaos and dissolve in glitch.

In the midst of it all are four performers – Fox himself, two musicians on violin (Erkki Veltheim) and synth (Madeleine Flynn), and singer Georgina Darvidis. Fox, at a bank of winking consoles, live mixes the sound from the other performers, folding it into an otherworldly soundscape of electronic noise. It sounds like what robots would sing to each other. Fragments of clarity – a tremulous string, a crystal pure note from Darvidis, a snatch of nostalgic song – emerge briefly, hauntingly, from the sea of electronica before being submerged again.

It is abstract and at times overpoweringly strange, but effectively evokes the image of a future in which humanity as we know it is becoming obsolete. The merging of humanity and machines, so central to Egan’s transhumanist vision, is cleverly depicted through interplay between singer Darvidis and the holographic projections which surround her, interact with her, merge with her and ultimately replace her. The shifting scapes of sound and light present a powerful vision of evolution in progress, in which order does not so much arise from chaos but rather both chaos and order increase together on a wave of growing complexity and the process of change is shown simultaneously as dissolution and creation.

Diaspora is a piece of art so futuristic it feels less like an adaptation of science fiction and more like the kind of art characters in science fiction might watch themselves. It is a lot to process on both a sensory and a conceptual level and after the show I feel shook. Diaspora, like the philosophy of transhumanism which underpins it, evokes both our most idealistic hopes for progress and our deepest uncertainties about the nature and integrity of human identity. It is simultaneously exciting and unsettling, inspiring and mysterious, triumphant and melancholy, just like the concept of the future itself.