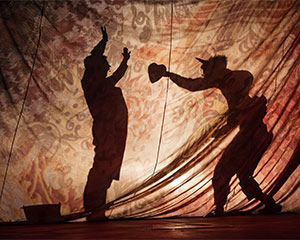 The house was packed with children of all ages and mostly accompanied by adults. That is important to note because this show appealed to adults as much as the children. Cleverly written and adapted from the Dahl poems, the show was slick and silly, funny and furiously paced throughout.

The set was an ingenious large round box set on a revolving stage with multiple doors and hatch openings on the top of the construction. These gave the actors marvellous opportunities to pop in and out of the show at will, which they exploited to the max.

They were an exceptionable cast of four who between them occupied a host of characters with minimal props and accessories, rather than full costume changes. Nick Skubjj, Nellie Lee, Leon Cain and Judy Hainsworth worked at a furious pace with the rolling rhymes and delightfully eccentric characters.

The sound effects and lighting were stunningly good and exactly on cue. How rare and delightful!

Opening with a song entitled “I guess you think you know this story” which smartly encapsulated what we about to witness. The real unvarnished true version of whitewashed nursery stories of generations past.

This was a polished package presented by shake and stir theatre company who brilliantly worked in some very amusing modern touches such as the cell phone, selfies and lip gloss. Fabulously reinvented tales included the “true” version of Cinderella, The Three Little Pigs, Goldilocks and the Three Bears, Snow White, Red Riding Hood and Jack and the Beanstalk. Unknown to me, were stories about a girl who met a trans-Channel leaping giant toad and another gullible lass who unknowingly sat on a porcupine with disastrous consequences.

Gruesome consequences were a common thread with more than one child being devoured, largely by wolves and bears. Here I must state that the appropriate age for theatre attendance stated by the media release (0 to 100) is, in my opinion, wrong. Sitting in front of a distressed two year old who burst into tears at the be-heading of Cinderella’s ugly sisters and another of similar age who kept asking “when it would be over?” This is no reflection on the performance, the issue is parental awareness. I made the mistake of inflicting Cirque de Soleil on my four year old son and wondered why it didn’t work.

This is a supremely witty reworking of Dahl’s writings. Tricky and difficult to please as he was, I suspect he would have approved of the resultant work.

The Boy From Oz
One of the finest pieces of collective ensemble works seen for many years in Perth. Plaudits all round for this marvellous production. Firstly to the producers Trevor and Katrina Patient, who...