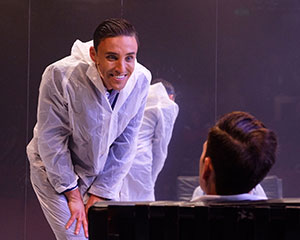 After a false start with a cancelled production last year, American Psycho – The Musical is certainly not your average night at the theatre – more of a dark trip into horrific satire than a jolly selection of show tunes. Adapted by prolific writer for stage, screen and comic books Roberto Aguirre-Sacasa, from the highly controversial 1991 novel by Bret Easton Ellis, American Psycho was previously adapted to film in 2000, starring Christian Bale in one of his enduringly famous performances. As such, even though this musical presents its own adaptation from Ellis’ original novel rather than being beholden to the film, it is hard to escape comparison to the latter’s own cult legacy.

It is then fitting, perhaps, in terms of giving this production a fair appraisal on its own terms, that despite a surprising amount of familiarity with the film through popcultural osmosis, I had never actually seen the movie in its entirety prior to writing this review. Some research indicates that both were adapted along similar lines, streamlining narrative events and toning things down by excising some of the more extreme content from the novel such as cannibalism and rampant sexual violence.

Oh, did I mention this was a black comedy?

Patrick Bateman is the epitome of the late 1980s affluent yuppie. A 27-year-old investment banker on Wall Street, he is a radical narcissist, conversely crippled by jealous inadequacies, and completely addicted to conspicuous consumption. Bateman is obsessed with recounting in an almost autistic detail his choices of the most expensive and fashionable clothes, accessories, electronics, restaurants, and especially business cards. The very notion that one of his young colleagues might favour a rival’s card over his as possessing more tasteful choices of font or off-white colouring are enough to drive Bateman to thoughts of murder. Or, well, actual murder.

Did I leave out the part about him also being a serial killer?

Indeed, the only thing Patrick Bateman likes more than mansplaining the myriad details of his heavily-branded beauty regimen, or spouting off his exhaustive opinions of pop music artists… is wearing a raincoat over his expensive suits to keep them clean while butchering prostitutes, vagrants and office frenemies with axes, kitchen knives and chainsaws.

American Psycho has been widely described as “transgressive satire”, particularly the original novel which incited various moral panics and publishing restrictions. Many who decried the book were evidently either failing to understand the underlying comedic inflections, or did, but felt that such wallowing in depravity overshadowed any literary merit.

Ellis himself said of the film version that he felt that dramatising the work helped clarify his satirical tone, as well as more demonstrably indicating that it was a critique of the kind of self-involved hypermasculinity and amoral consumerism that were widely celebrated in the “Greed is Good” ‘80s, as virtues rather than vices. Indeed, for while the yuppie stereotype may have faded from society, the novel’s characterisation of Bateman and his savagely vapid world of shallow excess devoid of empathy or compassion seems in some respects more relevant than ever.

In our post-GFC world we are all too willing today to accept a villain hailing from Wall Street, and our current cultural discourse is far more open to a scathing critique of toxic masculinity and conspicuous consumption, framed as endemic problems of the soullessness of late-stage capitalism. After all, what could be more on-the-pulse today than the weirdly prescient fact that narcissistic psychopath Patrick Bateman’s idol is none other than “The Art of the Deal”-era Donald Trump?

Of course, one of the subversive dark pleasures of American Psycho is that Bateman is not so much the villain as the equally charismatic and pathetic antihero, since the story is told entirely from his point of view. His roiling psychosis is the kaleidoscopic lens through which we view the duality of his hedonistic world of material excess and the only marginally more perverse shadowscape of his nightly sideline as a serial murderer. It’s a breathlessly exciting ride, punctuated by endless sex, drugs, money and madness.

Part of the madness lies also in the ambiguity of Bateman’s soul-searching quest for identity, the existential crisis in which he constantly gets confused for one of his colleagues, and vice-versa, while pantomiming through a relationship to a social climber he can barely stand. Being a serial killer seems like an almost straightforward activity by comparison, or at least it would, if we could be entirely sure everything we’re seeing on stage is actually real.

Patrick Bateman may or may not be an unreliable narrator, and the inherent surreality of musical theatre, with its frequent quick-change doubling of roles and slick transitions from dialogue to feverish inner monologue to bursting into song, is especially well-suited to furthering this uncertain diegesis.

The musical numbers and general soundscape of the show is quite striking, an often very intense amount of period-appropriate synth in the general score and original songs by Duncan Sheik, peppered with some snippets of actual ‘80s pop hits, also sung by the ensemble. It’s an unconventional middleground between a traditional and “jukebox” styles of musical, producing a dissonance befitting the fractured psyche at the heart of the narrative. The use of certain famous tracks is almost essential too, as Patrick Bateman is notably obsessed with reeling off (likely regurgitated) analysis of pop music in an effort to sound more intelligent, particularly in a memorable murder scene that closes out the first act.

Speaking of the murders, one of the surprising aspects of the musical adaptation is the fairly restrained amount of bloodletting that actually takes place onstage, even discounting what appeared to be the possible malfunction of a bloodspray effect at the aforementioned closer for Act One.

Fans of the notoriously grotesque book may perhaps be put out that there is less theatrical bloodletting here than in your average production of Sweeny Todd or Titus Andronicus, but I wouldn’t say this particularly detracts from the show.

The storytelling certainly conveys its disturbing content through other means, and on a technical level one can appreciate that spectacular theatrical gore effects would be logistically incompatible with the musical’s brisk pace, and this production’s complex staging in particular.

Director Alexander Berlage and musical director Andrew Worboys have harnessed this difficult material and directed quite a spectacle. They have crammed in an impressive revolving set by Isabel Hudson, of a type not uncommon in mainstage productions, but unheard of (at least to me) in the Hayes Theatre’s modest venue. Constructed out of mirrored surfaces evoking trendy ‘80s retro-brutalism, axial walls divide the stage into rudimentary “rooms” of differing sizes, this simple yet eye-catching set is utilised in an unconventionally kinetic manner.

Choreographer Yvette Lee works overtime in collaborating on this quite elaborate staging, with the revolve in seemingly near-constant use. Rather than simply rotating its segments into different static setups for scene-changes, the stage frequently operates in continuous motion, especially mid-song, so that Patrick Bateman can stride along the moving circumference, passing through the outer doorways that variously represent offices, apartments, clubs or simply abstract spaces.

Meanwhile, the rest of the cast frenetically rearrange themselves into changing tableaux of sweaty aerobics, coke-fuelled debauchery, scenes of high finance or grand guignol, all sweeping past behind our spotlight-seeking protagonist.

It’s a frankly impressive spectacle that must have been extremely challenging to rehearse, and is masterfully executed without a hitch. Indeed, if sculpted ‘80s “hardbody” physiques wasn’t a requirement for these roles anyway, one can only imagine the actors would end up in that kind of shape simply by dint of performing this highly physical, and frankly exhausting-looking show.

Not only is it an extremely buff and attractive cast, as befitting the material, but clearly an extremely talented one as well, with everyone constantly switching between their primary characters and assorted chorus and background roles.

Although there is not a single lacklustre performer in the group, special plaudits go to Shannon Dooley, primarily in the role of Bateman’s cluelessly self-absorbed girlfriend Evelyn, Liam Nunan as the fawning Luis, and Loren Hunter in the most comparatively down-to-earth role, as besotted secretary Jean.

Erin Clare shines as Bateman’s mistress Courtney, but perhaps moreso in her succession of background roles as random ravishing airheads, club girls and socialites, her comic timing and outrageous miming skills make her perhaps the stealth MVP of the cast, when it comes to nailing the comic tone.

Somewhat akin to Jared Leto’s divisive turn a few years ago as the Joker, in this show’s lead role Benjamin Gerrard delivers what I suspect might best be described as “a marmite performance”. Paraphrasing the concept of “a marmite film” being one which viewers typically either love or hate, yet rarely react to with indifference, Gerrard’s turn as Patrick Bateman is decidedly peculiar, mannered, and suffused with flashes of manic humour that are so over-the-top that he manages to out-camp everyone else, even amongst a cast who are almost all dialing it up past 11 to begin with.

It certainly doesn’t appear to be an unconsidered or frivolous approach to the character – indeed, one suspects a lot of work between Gerrard and director Berlage went into honing it to this very specific array of extreme tonal shifts and performative tics. Personally I loved it, so my only hesitation in describing it as a brilliant performance is my instinct that it will be simply too broad at times for some, even amidst this extremely stylised context.

Yet I would argue this is probably necessary in a production with such a heightened theatricality evident across the board in the surrounding performances. For Bateman to stand out as the scene-stealing psychopath that he needs to be, playing the role with understated smoulder or creepily serpentine stillness, in this production at least, would have certainly been a mistake.

American Psycho – The Musical will definitely not be everyone’s cup of tea, but it is an excellently performed, extremely dynamic production of a very funny, alarming, thought-provoking and wildly entertaining show. This intense and unsettling romp satirically literalises the madness of the ‘80s capitalist fever-dream that birthed the nightmare of the increasingly iniquitous world we are now living in, wherein a fictional American psychopath’s role model is now, scarily enough, America’s very real president.