A View from the Bridge | Melbourne Theatre Company 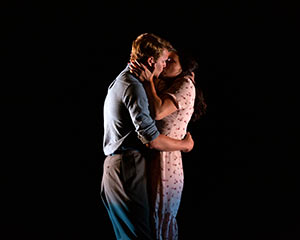 Arthur Miller’s masterpiece, A View from the Bridge explodes on the stage of the Sumner Theatre in Southbank.

When Eddie agrees to take in two Sicilian refugees, his character is tested by the dashing young Rudolpho (Andrew Coshan) whose bright, sunny nature seems to bring out the worst in Eddie. Things only become worse when Rudolpho falls for Catherine and Eddie struggles with his own feelings of jealousy and betrayal.

Joined by Damian Walshe-Howling as the stoic older brother Marco, Walshe-Howling is transformed on stage as the strong silent type, who’s temper you can see simmering away just below his calm surface.

What struck me most about A View from the Bridge was that even though Miller wrote the play in 1955, its themes are as relevant today as 1950s Brooklyn. Immigration, refugees, homophobia and racism remain topical and it’s pertinent to note that as a society we haven’t come all that far since 1955.

A View from the Bridge holds an almost unbearable tension throughout the play. As an audience you’re never let off the hook, even in the place where ideally an interval would be, there is no reprieve. The play continues and the tension tightens to breaking point before an explosive ending of tragic proportions.

Narrated by Marco Chiappi as Alferi in an almost Greek Chorus style, Chiappi’s velvet voice is the voice of reason in this emotionally charged production. MTC stays true to form this season with a stellar line of plays on offer. A View from the Bridge is a heart wrenching portrayal of misplaced desire, family loyalty and the American Dream.