I Put A Spell On You | Julia Messenger 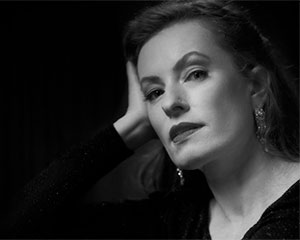 The Timeless to the Modern: Celebrating jazz and soul – the old and new.

Presented by Melbourne Recital Centre and Brunswick Industry, I Put a Spell on You saw Messenger joined by a quintet comprising Mark Fitzgibbon on piano, David Jones on drums, Craig Newman on bass and Anthony Norris on trumpet. Messenger acknowledged her band several times throughout the night.

The aim of the show was to blend the old with the new, offering audiences her interpretative down-tempo ‘nu-jazz’ approach melded with more traditional styles. We got to hear some classics, some jazz versions of songs from other genres as well as some of her own compositions.

Messenger opened with a light-hearted version of Black Magic by Harold Arlen and Johnny Mercer. At first Messenger sounded subdued and the delivery was overshadowed by the musicians. But an unpromising start was turned right around with her second tune, a slow bluesy rendition of Jay Hawkins’ I Put A Spell on You.

Round Midnight came next, in a softly textured moody style. Then we were treated to one of Messenger’s own compositions, the upbeat love song All that I Am. A heart-wrenching version of the Gershwin-Heyward classic My Man’s Gone Now came next, all texture and range. The next song was a surprise, a jazzed-up version of Blondie’s Heart of Glass. Nearly unrecognisable, the freshness here gave offered a new appreciation of a familiar song.

Like Stars That Fall was another of Messenger’s own songs, completely in place. Her own phrasing allows for word-heavy lyrics which inadvertently allow her strong technique to shine. You can hear nods in her singing to the legendary women jazz and blues singers such as Fitzgerald, Nina Simone and Sarah Vaughn but Messenger has a distinctive stamp of her own and her voice has reached an enviable maturity.

Depeche Mode’s I Feel You was given a darkly sculptured rendering; the same tone was applied to the famous and much-covered Sophisticated Lady. By now it was obvious that Messenger delivers a world-class show; her 2017 show at Melbourne Recital Centre was nominated for the Arts Music Award for Excellence in Jazz so it’s great to see her starting to see some much-deserved recognition.

An intimate, very personal low-key take on Carol King’s Natural Woman was a refreshingly original approach. With greatness in jazz singing becoming defined increasingly by a big sound and sustained notes, it’s so good to see a singer unafraid to get right in close and make us lean forward to listen. Messenger can blast and soar with the best of them, but she also compels when she purrs.

There was time for one more: Stormy Monday by Aaron Walker a.k.a. T-Bone Walker – an elevated note to end on. Messenger’s musicality is impressive and her showmanship unpretentious. This show was sold out, so when Messenger performs again, be sure to get in quick.