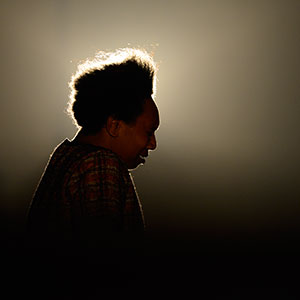 Stolen is the second production from the newly minted National Theatre of Parramatta, and like the previous, inaugural show, Swallow, the director is someone better known as a choreographer. With Vicki Van Hout at the helm, it becomes a more of a movement piece than the original inter-connected monologues literally bedded down in Jane Harrison’s text.

First produced eighteen years ago, Stolen tells the stories of five people, three women and two men, who are affected by the government sanctioned forced removal of children from Indigenous families.

Ruby (Berthalia Selina Reuben) was stolen and beaten into a beast of burden, domesticated through savagery, enduring experiences that are literally unutterable, the horror articulated in her haunting refrain, “I promised not to tell.”

Shirley (Henrietta Baird) was taken as a child and in sickening cyclic pattern, had her own issue stolen from her. Her abiding hope is that her grandchild will not share the same fate.

Jimmy (Matthew Cooper), told fallaciously by the authorities that is mother was dead, becomes a thug and a thief, but “I’ve never stolen anyone’s soul.” He hangs in there for as long as he can before succumbing to “the shrivelling of his soul.”

Sandy (Kerri Simpson), a brash young bloke full of cheek and chutzpa, has been the eternal fugitive, hidden from the authorities by his mother, shunted from one sanctuary to another, developing into a rootless drifter – “been everywhere, except one place. Home.”

And Ann (Matilda Brown), a pale skin adopted by a white family, growing up not knowing she is Aboriginal and confronted with her own personal journey of reconciliation – “I got my Mum some milk chocolates. And I got my mother some dark chocolates.”

Imogen Ross’s set is dominated by a huge rainbow tree mutely lit by Toby K with emphatic punctuation by black out and fierce red. The video screen used for the projection of letters seems to be at anachronistic odds with the portable typewriter used to write them.

Phil Downing’s sound design works a treat as the clickety clack of railway tracks and the tapping of the typewriter syncopate with the beat of the human heart.

Stolen is on the school syllabus and deserves to be. This production, infused with dance and song cycle, is an innovative and energetic entre into the study of this powerful, enduring and evolving text.