The Wind in the Willows | Australian Shakespeare Company 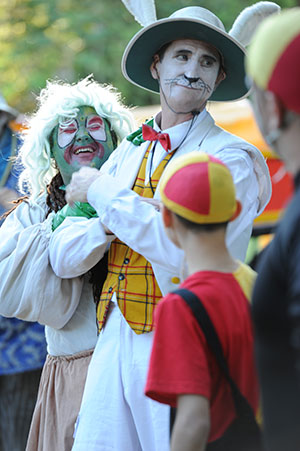 The Wind in the Willows is a classic in more ways than one. Published in 1908 Kenneth Grahame's children's book has been read by generations of children and adapted on numerous occasions for stage, film, television and radio.

One of the longest running productions must surely be that of the Australian Shakespeare Company. This is the 28th consecutive year they have presented their version of The Wind in the Willows in Melbourne's Royal Botanic Gardens. A sign of the passage of time, and the commitment of all involved, is the fact that this year's director Otis Elston, son of creator and writer Glenn Elston, first walked the boards, or should I say the grass, as a child in the role of Portly, the young otter.

It seems unfair to pick out favourites but I have to admit that Mr Toad (Ryan Hawke) was one of mine, which would please the pompous devil no end. He really looked the part decked out in green striped trousers, waistcoat, top coat and straw boater. His face was a slimy dark green with yellow warts and his hand/feet were green, slippery and constantly twitching, when his tongue wasn't flicking. He happily shook and shimmied his way through the performance, despite the heat.

The energy never flags and the performers have the audience eating out of their hands. The writing is fun and ensures that there are plenty of jokes for all ages. The live music adds to the atmosphere and it's rather amusing to see characters walk 'on stage' pulling their amplifiers after them. All ages happily joined in the action songs, and cheerfully split into groups to brave the 'Wild Wood' in search of the missing Portly. In fact the search was timed perfectly to burn off some pent up energy before the next 'act': running on the part of the younger audience members, a stretching of legs for the older.

Lots of action, laughter, song and dance meant that children of all ages were totally engaged from start to finish. After the perfomance the characters stayed to chat and have photos taken, before hurrying back to their holes, burrows, or Hall.

As we left the two seven year olds with me began chattering about the performance, discussing their favourite characters, their favourite jokes and the most exciting moments. And when they reached home were still talking about the show and doing their best to convince they adults to go again.

What better compliment can there be? Clearly a must see.