The opening night of the Opera Australia’s first complete Ring Cycle, by Richard Wagner, will take place on Monday, in Melbourne’s State Theatre. It is an event of enormous significance for Western culture in Australia.

Wagner’s Ring Cycle is one of the towering masterpieces of Western art. In terms of length, in the genre of opera when anything over three hours is considered long, its eighteen hours are simply outside the box. But to my mind it is incredibly short, considering that it is nothing less than a mythical history of European society, values, and politics, and the terrible human consequences of wrong action. In terms of character, since many of its personages are supernatural, the Ring is sometimes considered heavy-handed, compared for example with Mozart. Yet, while Mozart’s quicksilver wit can reasonably be said to be absent from Wagner’s operas, the characters in the Ring cycle enact human psychological imperatives that in many ways anticipate Freud.

But no-one cavils at the music. Wagner’s score itself pursues the history of European tonal music, from its origins in a single tone with its overtone series (the opening of Rheingold) to the eventual breakdown of tonality under the fracturing strain of chromatic processes (the music of deceit, from the magic fire to the Tarnhelm). Its expressive power, its dramatic plasticity, and its sheer originality have never been equalled. Wagner’s intention of matching the music to what he called the drama (the multi-layered web of will and events) provides a fertile landscape for directors, who must draw their interpretations out of the music itself. And this can lead in unexpected directions, as music is paradoxically both more precise and more ambiguous than words. That is why Wagner’s work, especially the Ring, has been produced in so many different styles. As with myth in general, the surface is unimportant – it is only a vehicle for penetrating the inner meanings of the work.

Two complete cycles have been heard recently in Australia, both in Adelaide, in 2000 and 2004. In 2000 the production was imported, from Paris, but the second was an Australian production, by Elke Neidhardt. It contained some wonderful coups de theatre. In Die Walküre the famous Ride of the Valkyries took place not on a rocky crag but in a posh night-club called the Wunderbar, where the valkyries bringing the bodies of heroes fallen in battle were glamorous escorts. Some objected that this demeaned the glorious dead. Personally I thought it likely that if the battle-weary soldiers ever thought of a heaven, it would probably involve beautiful, available women, and alcohol. And after all, Brünnhilde promises Siegmund that he will be greeted by “Wunschmädchen” when he arrives in Valhalla.

Opera Australia has planned a Ring for a long time. In the 1980s Stuart Challender conducted Das Rheingold and Die Walküre, the first two operas in Wagner’s vast work, but the third and fourth were shelved after Challender’s tragic death in the early 90s. Then, when Simone Young began to work towards a cycle during her artistic directorship of OA in the early 2000s, she was forced to resign for the petty-minded reason that she was costing the company too much. (Excuse me, since when was cost ever the purview of the artistic director of an opera company?). In recognition of her outstanding Wagner performances here and in Europe and the USA, Young was invited to conduct the present cycle. But she was already committed for the time Opera Australia wanted to perform it (this year is Wagner’s centenary year). Well, such a giant undertaking was never going to be easy. But the run of performances in Melbourne is sold out, so it is to be hoped that it will not be financially unviable. 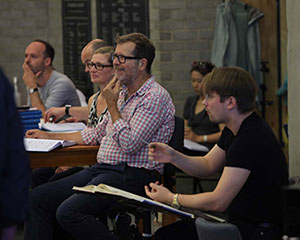 The OA’s current production is by Neil Armfield, a veteran of many operatic productions including, memorably, The Eighth Wonder, Alan John’s masterpiece about the construction of the Sydney Opera House, OA’s principal home. (It is the 50th anniversary of its opening next year – we can expect a return of this iconic production. Among other things, The Eighth Wonder explains why the production of the Ring under discussion is not taking place in Sydney.) Armfield spent many years with the Sydney Theatre Company before directing opera, and his work, deriving in part from the Brecht tradition, is often confronting. Let us expect to be challenged.

But why does this add up to an event of such significance for Western culture in Australia? Because Opera Australia, among all the excellent opera companies in this country, is the flagship, receiving more from the government than all the other companies put together. Because, when the OA performs this work, it means it is no longer an impossible work only performable in exceptional circumstances. It has become mainstream, as it is in Europe and America. And this means we may just possibly have completed our emergence from under the cultural cringe.