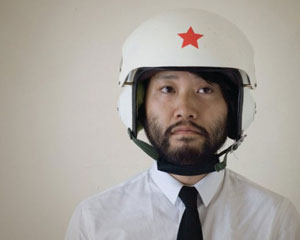 Despite a power failure setting the start time back an hour the mainly youthful large crowd were enthusiastic in their reception of the perky young support artist Laura Davis. Of course the bar had been open during the delay but this is not a true reflection of her burgeoning talent. She bounced onto the stage and worked her way confidently through the familiar theme of the unsuccessful single, with some witty and original observations on diversionary tactics from this sad state of affairs. Her inventive ideas for distractive eating various foodstuffs in the shower and pasting Kraft singles onto different parts of your body were well received. She neatly closed her set with a sweet and corny gag and a generous introduction to the star of the evening, Lawrence Leung.

Having not experienced either his television or live appearances (I know I must have been living under a rock – apologies aficionados!), I can only say that I was blown away by his performance. Not only his charming portrayal as a geeky, self-deprecating child of migrant parentage, but his seamless segueing from theme to theme and story to story, all beautifully scripted into tight and utterly satisfactory finales.

His theme of Chinese looking incredibly younger than their Western counterparts at the same age was a brilliantly-pursued running gag throughout his generous one hour and fifteen minute hour set.

Cleverly used slides and video footage were utilized to illustrate and underline some of his gags and anecdotes. The most endearing being the early photos of his father at the same age as Leung is now. Lueng senior is featured beachside in a relaxed pose, smart casual attire, dark glasses and a fetching pompadour hairstyle. "How cool is my Dad?”

Praising the courage of his immigrant father’s risk-taking bravery in migrating to a totally foreign county at the same age as Leung is now (33), Leung ponders what amazing developments he will witness at the same age in his own lifetime.

Citing television programming that actively encouraged looking toward the future (“Towards 2000” and “Beyond 2000”), Leung poses the question – "Where are the jet packs?” As his father pithily remarks “It’s not rocket science!.”

Thus we begin a tour of eccentric contemporary rocket scientists and like-minded associations. These consist of two arch rival inventors in America, two sworn enemy rocket invention associations in Australia and an eccentric New Zealander inventor. None of them are particularly successful, peopled as they are, by exponents with off the beam brainwaves and ridiculously inept inventing skills.

Leung uses these characters to great effect as he mimics their ludicrously self-important claims and hilarious accents. I am sworn to secrecy as to where this leads Leung but, suffice it to say, he concludes that the age of jet packs is still in the far distant future.

There were many other self mocking amusing tales woven cleverly into this marvellous monologue. As a raconteur, his timing was faultless. Leung is a consummate comedian with a seemingly relaxed performance demeanour that belies his extremely clever writing skills.

This show has earned well-deserved plaudits in the Melbourne and Sydney Comedy Festivals as well as during a London season. This national tour will continue to add to his considerable fan base as he travels around Australia pining for – a Jetpack.