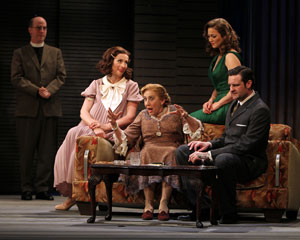 “I love dysfunctional families” stated my theatre companion during interval; "they are so interesting to watch." Therein lies the continuing appeal of Tennessee Williams’ Cat on a Hot Tin Roof, currently showing at the State Theatre Centre as part of Black Swan State Theatre Company’s main season.

Set in the Mississippi Delta in the 1950, the play is performed the play takes place over one evening as the Pollitt family gather to celebrate Big Daddy’s birthday. Set entirely in a bed-sitting room on the family’s plantation, it leaves little scope for set or lighting changes, which places the focus squarely on the performers. Directed by Kate Cherry, the cast excelled in some parts, although as a whole I wasn't blown away by the production.

The family is as dysfunctional as you get: Brick is the favourite son, a former athlete but now a drunk battling his repressed emotions. Brick’s wife Maggie is desperate to regain Bricks love. Big Daddy is dying, but no one is willing to tell him so, whilst Big Mama continues to remain devoted even though Big Daddy clearly looks down on her. Gooper, the other brother, jealous and bitter from living in the shadow of Brick for many years, is already scheming with his wife Mae to secure the inheritance. Mae and Maggie hate each other with vehemence. Its two and a half hours of TV soap. One wonders, really, how the family had all stayed alive for so many years.

Long meaty bits of texts, essentially monologues, feature prominently in Cat on a Hot Tin Roof, the key example being Maggie opening the play and talking solidly for at least 15 minutes. Patience is needed, the more you listen, the more interesting it gets, and the more revelations are exposed.

Although Brick is on stage for the majority of the piece, he spends a large part of the performance reacting to other people and getting steadily drunk. Tom O’Sullivan did an admiral job of portraying the isolation and confusion swirling around in Brick's head, and managed not to veer into a stereotypical drunk.

John Stanton as Big Daddy was perfectly cast. Domineering in looks and voice, he matched Big Daddy's persona to a tee, yet was still able to show the softer side during the later scenes with brick. Carol Burns as Big Mama was too exaggerated, although the character is written that way I felt it was a bit one dimensional.

Caitlin Beresford-Ord nearly stole the show as Mae, the bitchy, wily sister-in-law who wants to get her hands on the inheritance. Some of her lines were spectacularly biting, and Beresford-Ord was highly entertaining, albeit dislikable. Gooper, played by Hugh Parker, unfortunately faded into the background compared to the strong characters surrounding him. So to, did the Doctor (Damon Lockwood) and the Reverend (Daniel Murphy), there was no real character development to be seen. It was as though they were an afterthought of Williams, there purely to say one or two key lines and move the plot along.

It was when multiple cast members were on stage that the production felt a bit loose. Whether intentional or not, there was some noticeable talking over the top of each other, or the occasional awkward pause. Hopefully these were just opening night nerves – otherwise, Cherry has directed a tight, well performed play. The accents held out well, thankfully, not an easy task with the southern drawl.

Cat on a Hot Tin Roof is a seminal piece of theatre and the themes, although not quite so outrageous in today’s day and age, are still potent enough for the play to remain popular. It still continues to be a must see play at some point in your theatre going life.