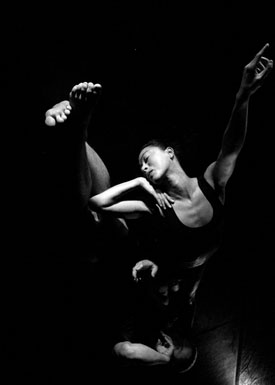 For two weeks this March, Dance Massive hits Melbourne. The biennial contemporary dance festival has already created a buzz around town, quite a feat given that this is just the second time the festival has been conducted.

In Glass is one of four shows being presented at the Malthouse as part of the festival. The work premiered last year at the Sydney Opera House and now it’s Melbourne’s turn to be presented with a work that both illustrates and challenges our notions of perception – of ourselves, of others, and the world that might exist in our subconscious, or on the ‘other’ side.

Crucial to the creation of this concept is the use of three large, one way, mirrors. Amidst a set that is otherwise in darkness, the skilful adjustment of Karen Norris’s lighting against these not only causes the light to refract and bounce, but to transform the mirrors into transparent windows around which the dancers traverse. And, just as quickly, the glass that allowed a view through to an ‘other’ side, and suggested a possibility of reaching that space, can change back to be a highly reflective surface that traps the dancers, leaving them with no where to go, and perhaps most importantly, forcing them to look back at themselves.

Choreographer Narelle Benjamin has a background in yoga and the influence on her movements is evident. They certainly demonstrate the quite astonishing flexibility, control, and precision, of dancers Kristina Chan and Paul White. There is also great intricacy to Benjamin’s choreography and many of her movements focus on parts of the body that may otherwise be overlooked such as the performers’ hands, even their fingertips. Though always interesting, Benjamin’s movements become a little repetitive, and given that there are only two dancers on stage they are perhaps better suited to works in a shorter form.

Like many modern dance works of late, In Glass’s soundtrack, created by Huey Benjamin, is loud and constructed. The track has hints of whirring helicopters, the scratching and jumping of CD’s, or music that’s been turned up loudly and quickly through speakers. It certainly creates mood and does have changes of pace, but it is in the few moments when there is a recognisable beat, to which the dancers move and which the audience can follow, that form some of the most engaging pieces.

In this work there is an absence of representation of true physical or emotional interaction, relationships, or feelings, between humans. Rather there is a focus on self-indulgence, gaze and spectacle. It is rather cleverly highlighted in the piece where White removes his shirt and then takes on a series of movements that emphasise his muscular physique and breathing. The movements are slow and controlled and whilst he has finally taken on a recognisably human form, he is an object rather than a character. It is certainly a visually interesting – even stunning – piece, but from an audience point of view, the few times that White and Chan dance physically connected, rather than alone or even in unison, is what gives this work soul, as well as creating a much needed change in movement.

Perhaps the most arresting moment of this work features White and his movement of two oval mirrors. He moves these so that they capture the light, and then places them on either side of his body and head. His pressing of the seemingly sharp mirrors to his neck certainly raises the tension of the piece, but it also means that that he can look at his duplicated self, dance with himself, kiss himself. Perhaps rather telling of human character, this narcissistic display is the only time that either of the dancers show any intimate engagement, or have eye contact, with another faced form.

Crucial to this work in terms of adding interest and further depth to the notion of perception and distortion, and the possibilities that exist beyond our immediate selves, is Samuel James’s video imagery. This is intermittently projected on to the central mirror, turning it into a type of film screen. Often the dancers’ bodies move in front of it whilst their bodies are projected and enlarged in the images behind. Their bodies morph into these images making it difficult at times to tell the difference between where the live body stops and the projected moving bodies on the film begins. At other times, the images projected depict a colourful and rather magical alternative world. A black hole seems to appear in the screen and around, and then through it, appear images of Chan in grass fields and swinging from lush trees. Much like the stories of Alice’s Adventures In Wonderland and Through The Looking Glass, the work as a whole resembles both the dark and whimsical worlds on the other side of the black hole and the other side of the mirror.

There is certainly room for this work to express more light and shade in terms of mood and movement; in its current form there is a feeling that it goes on just a bit too long. That said there are many impressive and visually interesting elements here, and for the most part they work well together. If this, Benjamin’s first full-length work, is any indication of what we can expect from her in collaboration with other talented artists such as Chan and White, there is much to look forward to in the future.


Malthouse Theatre presents
In Glass
Part of the 2011 Dance Massive