The Seraphim Trio is a fervent group of musicians who have been bringing new and old chamber music to Australian audiences since 1994. Anna Goldsworthy (piano), Helen Ayres (violin), and Timothy Nankervis (cello) combine instrumental mastery, musical insight and passion in their yearly series which features the best of the piano trio repertoire, other chamber music and, each year, a piece of new music commissioned by the trio. The 2011 Series titled ‘Masterpieces’ has been recently announced. 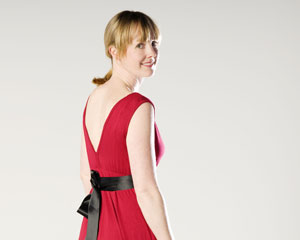 Daniela: Helen Ayres thank you very much for talking to Australian Stage Online. What is in store for your fans in 2011?

Helen: This is the fifth series that we’ve presented and it was quite important for us this year to have a celebration of master pieces of the piano trio repertoire. We are celebrating old and new works, but we’ve particularly chosen to feature three of our favourites.

The first concert called ‘The Wanderer’ features Schubert’s Piano Trio D. 898 in B flat, which he wrote in 1827. He came to it after a break of 15 years from writing for that genre and it was actually finished the next year - the last year of his life. The B flat trio is the first of his two great piano trios that were both completed in the last year of his life. We are commencing the concert with Schubert’s D. 28 in B flat major ‘Sonatensatz’. We have combined these works with Hummel’s Piano Trio No. 5 in E Major, Op. 83.

Our second concert, ‘The Romantic’, features Tchaikovsky’s trio in A minor, Op. 50. It was written in 1880-1881 after Tchaikovsky’s patroness Nadia von Meck asked him to write a piece for violin, piano and cello. His original reaction to this request was not favourable. He didn’t like the idea of writing for this genre and it wasn’t until one year later that he finally relented and actually, without any provocation, suddenly came up with this piano trio. The beginning of the trio is written ‘In memory of a great artist’. This refers to the pianist Nikolai Rubinstein, who died in 1881. So, as you can imagine, the trio is very tragic. There are only two movements in this trio, despite the fact that the trio is nearly 50 minutes long. The two movements both end in a funeral march. It is definitely a funeral march for Nikolai Rubinstein – the great pianist. The second movement is a theme and variations not dissimilar to the ‘Variations on a Rococo Theme’ for cello and orchestra. The whole trio starts with a cello solo, which I think shows that Tchaikovsky favoured that instrument. We have complemented this great piece with Bloch’s Three Nocturnes and Mozart’s Piano Trio No. 3 in B flat major, J 502.

For the final concert ‘The Visionary’, we are featuring Messiaen’s ‘Quartet for the End of Time’ and for this we bring in the clarinettist Paul Dean. We have worked with Paul Dean in 2010 at his Bangalow Music Festival. He just brings the stage to life when he plays Mozart’s clarinet concertos. I’ve played with him in the Melbourne Chamber Orchestra when he was soloist in Mozart’s clarinet concerto. This is one of the memorable music experiences of my life.

Messiaen’s ‘Quartet for the End of Time’ was written in 1940. At that time Messiaen was interned in a German concentration camp and he met three fellow prisoners there. One of them played the clarinet, the other the violin and the third the cello. He wrote for them a very short trio. This trio was expanded, and Messiaen added seven more movements. He added a piano to the ensemble as well and it became Messiaen’s ‘Quartet for the End of Time’ that we hear today.

This is a profoundly moving work. The Seraphim Trio first played this about five years ago. I remember we were in a practice room at the ABC studios in Melbourne when we sight read the whole work; it is about 50 minutes long. It was quite a profound experience playing it collectively for the first time. So, we are really excited to come back to this five years later to perform it.

Daniela: I am sure your audiences will be waiting impatiently to hear, especially the Messiaen, but this concert is going to feature yet another commission. I was fortunate to be present during your last concert here in Adelaide when you performed one of your usual yearly commissions of new compositions. What new work are you going to feature this year?

Helen: Our new commission in 2011 is a quartet for clarinet and piano trio called ‘Converging Spheres’ by the clarinettist Paul Dean. He hasn’t revealed too much yet about the work. It is appearing in the final program. We are starting the program with a Beethoven trio for clarinet, cello and piano in B flat, Op. 11. Unfortunately, I have to step aside for this one, which is going to be very difficult. After that, we will hear Paul Dean’s ‘Converging Spheres’. There are a series of lighting backdrops for this concert which we will definitely feature and that should be a collaboration between the performers, the artists and, of course, the most important person for ‘Converging Spheres’ - Paul Dean himself.

Daniela: Let’s talk about venues. What venues are you going to be playing in this year?

Helen: We are very excited to be expanding our series to our first regional centre, Ballarat. We played recently at the Art Gallery of Ballarat and were so inspired by the surroundings that we wanted to return. We are hoping that Ballarat is only the first of many regional cities that we take our series to.

We have our old friend - our home in Sydney, the Independent Theatre. We have played there for the last four years. We love that hall and that theatre so much, that we are very happy to keep going back there. We have a wonderful friendship with the people who work there.

We are also really excited to be returning to the Elder Hall in Adelaide which Anna and I know intimately from our years at the Conservatorium and plenty of concerts during our university days in Adelaide.

In Melbourne we will present our concerts in collaboration with the Melbourne Recital Centre. We have chosen to play in the Elisabeth Murdoch Hall and we are very excited that all three concerts will take place there.

Daniela: So you have played in the Elisabeth Murdoch Hall. What do you think about the acoustics there?

Helen: The acoustics are very real, very brilliant and very honest. We find that when we play there, exactly what we play is projected right to the back row. You can’t hide anything there. That is a good thing in a way because at the same time you don’t have to work hard for what you give. The Elisabeth Murdoch Hall loves the sound of Tim’s cello - it is like we are putting a turbo charger under the cello, putting a bit of a subwoofer there. But we love that as well. I love hearing the sound of Tim’s cello – it means that I am free to project on my higher strings, which is a wonderful thing.

Helen: We are starting off the year with a CD recording in January of Mozart, Haydn and Beethoven trios. This idea was born out of a concert that we just did at Macedon Music in the Macedon Ranges in Melbourne. We presented this program and we had a rather blessed day because at interval we received the wonderful message on our phones that our manager, Helen Burberry, who had been quite ill in hospital had made this wonderful, wonderful recovery. We went on stage jumping on air and we decided to make a CD out of that particular program. For me personally, the CD will be the memory of a very, very important day, on which our manager Helen Burberry stayed with us and is going to be with us for many years.

After the CD recording, we will be playing for Musica Viva in Tasmania. We are also going to be giving a tour of Canada, which is very exciting. We are playing at the MusicFest Vancouver and, hopefully, at the Ottawa International Music Festival.

Daniela: Helen I know that you and Anna are young mothers. How has motherhood changed your music making and for aspiring female musicians, what is it like juggling motherhood and music?

Helen: Having my daughter Evelyn has made me happier because she is such a blessing to me. However I don’t think being a mother has really changed my music making because I don’t feel that motherhood is a prerequisite to having any particular feeling of depth of music. Now when I have perhaps a higher pressure situation, I feel a lot calmer. Anna had so many things happen to her at the same time as becoming a mother. She has published a novel and she has gone on an international book tour, and she is coping with the performing and teaching at the same time. So, I think she is the consummate multitasker.

Daniela: The Seraphim Trio is very well known for its beautiful programming and with its clever sponsorship deals, would you please share some of the principles that you use to put together a really good program or a series and also how you involve businesses in supporting your music?

Helen: I think the most important thing a young chamber musician should have, after a love of music, is an understanding of your fellow performers. It is a great sense of loyalty that Tim and Anna and I have to each other. I will do anything for Tim and Anna and I know that they would do the same for me. Along the way you will face many challenges and if you don’t have a rock-solid relationship together, you will fall flat.

When it comes to attracting sponsorship, it’s amazing - if you ask, you shall receive. I’ve spent many years being too shy to ask for help but it is true. It is also important to recognise what music you love the most, what music is most important to you. So, if you are a string quartet or a piano trio or a duo, find an angle. For example, for 2011 we unashamedly want to present our love of the old masterworks of the piano trio repertoire and combine that with our support for new works and support for fellow artists and new composers. Then just listen, listen, listen to lots of different music to help you find your niche.

Once you’ve put together a program of works that you are passionate about, just go about asking people how you can present it and where you can present it. You might want to contact the Seraphim Trio via our website www.seraphimtrio.com to find out where you start in terms of involving businesses. We have a patrons circle – a group of professionals who all have something special to help us with. It might be someone who sponsors us with wine, or someone who has knowledge of the legal systems when we have questions about insurance – all of these things that we shouldn’t have to research ourselves. It is important and healthy to surround yourself with passionate and smart people who want to help.

Daniela: I noticed that you call these people ‘Angels’ on your program. This is really wonderful to show appreciation for everyone who chips in and makes these beautiful performances happen. Thank you so much for talking to Australian Stage Online. We wish you a very successful 2011 season and we are looking to catch you in Melbourne, Sydney, Adelaide or in the Art Gallery of Ballart to enjoy the intriguing interpretations you always deliver.

A quarter of a century after being established, one of Australia’s most innovative and acclaimed contemporary dance companies celebrates its storied history with a new multimedia digital archive.