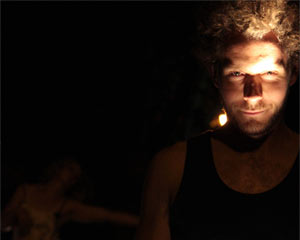 This week, on the evening that the storm hit Melbourne, Le Poulet Terrible held its opening night of Stephen Sewell’s relatively unknown work Nil, Cat and Buried. This is the third work that the company have staged at Footscray’s The Dog Theatre, and they are becoming known for producing some high quality performances. So, in the wake of the hot and humid weather, and the more recent flash flooding, it promised to be a most interesting evening.

In true Sewell style, Nil, Cat and Buried is a brutally honest work, where the characters and their stories, in all their ugliness, are shoved down the throats of its audience. Fifteen years ago Sewell wrote the work as three separate pieces, which for this production, Director Alice Bishop has skilfully intertwined within a claustrophobic space.

The characters’ physical surrounds, created by Sian Blohm, are as unforgiving as their domestic and emotional situations. The performance space has been confined to the very end of the room, with just three rows of seating which face a wall of black plastic and a floor of brown soil. Isobel Ferns’ lighting highlights the harsh palette of rust brown and black – all mirroring and compounding their hopeless stories. Aside from the clothes on the characters’ backs and the gun that is passed between them, there are few props. The focus on the stage, and the basis of much of the intrigue in this work, is the freshly shovelled pile of soil and what lays only partially buried beneath its surface. As seems to be the case time and time again in this work, the only sign of life or promise comes from that which is now lost; in this instance, a life that is no more.

Cat (Richard Cawthorne) has fled far from civilisation to a place where he has too much time to think; about his hatred of society, and of his disturbing, yet strangely romantic, penchant for little girls’ shoes, or one gathers, little girls. Karen (Elizabeth Thomson) is somebody’s mistress, torn between feelings of love and hate, for her lover, of herself, and with the situation in which she seems hopelessly trapped and which will inevitably end in tragedy. Then there’s Candy (Natalie Carr) and Nick (David Kambouris), a couple who have found themselves at an abandoned farm house, and in the darkness of night, with no one to hear the screams, Nick reveals more than a few ghastly secrets.

Sewell’s characters describe their stories of pain, murder, torture, adultery, incest and rape, explicitly. However, neither the content nor its delivery is anything new and in this sense they are rather uninteresting. Sewell’s writing of his characters also makes it difficult to invest in any of them emotionally. Saving this work to some degree is the way Bishop has intertwined the stories. The overlapping of these, and the performers’ close physical proximity to each other allows for comparison and ambiguity. The music, composed and performed on the violin by Biddy O’Connor, ties them together and creates some moments of great emotion.

To be fair, the extremely stifling conditions in the theatre on this evening made it rather difficult to concentrate, let alone allow oneself to be absorbed in this work. However, the cast, despite the conditions, gave truly commendable performances and through them the desperation, and at times brutality, of these characters came through.

If one of the purposes of Sewell’s writing is to show the potential for change by showing life at its worst, then in this at least it succeeds. Whilst all that is left for the characters in Nil, Cat and Buried is to find a way to reach tomorrow, as Cat says, these are the “darker doors that open because you opened the first one.” In the beginning at least, we control our own destiny.