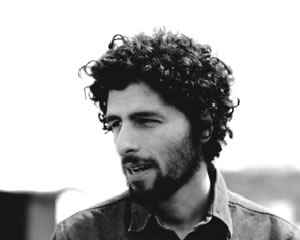 The first surprise about José González is the crowd he attracts. For an artist who dwells on the “folky” side of things I expect earnestly serious hippie types – but there’s barely a smattering. Instead, for the most part, it’s the distinctly mainstream and straight-laced corporate types who have flocked to the Angel Place Recital Hall to catch the Swedish-born classical guitarist with Argentinian roots.

As we shuffle into the hall we’re greeted by the warm, rich golden syrupy sounds of the support act, Aussie duo Luluc; who spend a good deal of their set compulsively tuning up their guitars, awestruck by the size of the gathering. But they’re sweet, sincere and pretty damn good once they settle in. With harmonies reminiscent of The Carpenters they take us back to a bygone, innocent era of wondering and wandering. By far, the best of their tracks is the catchy ditty ‘Little Suitcase’ which has scored a decent amount of airplay on Triple J and deservedly so. The pair, who are touring with González for the rest of his Australian tour, are well worth a listen.

The excitement is palpable as it gets closer to José time. The auditorium feels like a pressure cooker full of teens high on Red Bull at a rock gig who can’t wait to “cut sick”. It’s an odd vibe for a guy whose acoustic indie melodies seem so far from anything that could generate that kind of giddy electricity. But when the lanky Swede arrives on the moody smoke-filled stage the audience goes off - and he doesn’t disappoint. There’s an instant intensity and focus as González works his way through a mix of tracks from his first album Veneer and his latest offering In Our Nature. He’s joined for most of the set by his two compadres (who also featured on his latest album), Erik Bodin on percussion and Yukimi Nagamo, who takes care of backing vocals and the occasional cow bell.

There’s rousing renditions of ‘Love Stain’, ‘How Low’ and ‘Down The Line’ as swirling organic projections sail out across an audience who whoop and cheer at the slightest provocation. We’re all having a fine upbeat time, in spite of the brooding introspective nature of the tracks. Which is what lies at the heart of González’ appeal - his ability to explore the angst of stormy internal states without succumbing to them.

And while his accompanying musos lend strong support, González is at his best when they leave the stage and he flies solo. It’s the stripped back authenticity of his sound that we’re seeking and González delivers, with his masterful command of the acoustic guitar and his soulful and heartfelt vocals that can’t fail to move you.

As the show builds to its climax there’s a sense that we’ve been on a journey with him through some dark and intriguing places that speak volumes about the human condition. But it’s not a show that’s without humour. When González takes a break to tune up, he makes a cheeky quip about how he was planning to get a midget to tune his guitar for him on stage. He pauses for a beat to let the politically incorrect nature of the gag sink in before adding in a somewhat Borat-like fashion, “But that’s not cool.” And belly laughs echo around the room.

Interestingly, he saves the covers which have gained him much international attention for the encore. It’s hard to tell whether this deliberate ploy to isolate them from his original work is to make people aware that they aren’t really his – or whether it’s a straightforward acknowledgment of exactly how popular these reinventions are. Either way, the crowd go nuts for his fresh reworkings of Massive Attack’s ‘Teardrop’, The Knife’s ‘Heartbeats’ and Kylie Minogue’s ‘Hand On Your Heart’.

When he does eventually wind up and leave the stage, after a truly awesome set that flies, his presence still hangs heavy in the air. There’s a sense of elation tinged with sadness, and it’s clear that we’ve seen an amazing performer who’s left an indelible mark on us all.

The Judas Kiss | Red Line Productions
Hare vividly imagines the interior emotional lives of these historic figures and the infamous public airing of their scandal, choosing to focus on two key moments of “downfall” in Oscar Wilde’...