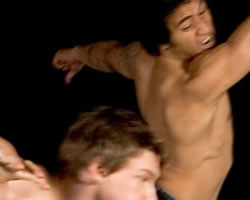 Black Grace, New Zealand’s leading contemporary dance company was a WOMAD exclusive. The performance included a collection of short sections from the company’s repertoire of celebrated works, all of which weave a unique fusion of contemporary and Pacific dance traditions to varying degrees.

A huge crowd gathered and marked out their space well before the performance began. A hush came over when six male dancers entered the stage and opened the performance with Fa’a ulutao, a snippet from a full length work which describes the cultural rite of passage of tattooing young men. The dancers cut an imposing and powerful image in the gathering dark.

The personable Neil Ieremia, Black Grace’s founder, artistic director and choreographer also took to the stage and introduced work and where particular pieces had originated. He graced the stage with a gentle sense of humour, openness, joy and sharing which has clearly rubbed off into his choreography.

The second piece for the evening, Minoi, premiered in 1999 and was based on a nursery rhyme which Ieremia taught the audience. The inspiration for the dance was an energetic Fa'ataupati (Samoan slap dance) building rhythm from movement and a cappella vocals, an inspiring combination to see coming from contemporary dancers. Minoi 2 came from the same source but pumped with a different energy set to the sounds of a throbbing electronic beat.

In 2002 Black Grace worked with female dancers for the first time, premiering Human Language. This piece brought yet another look, sound and story to the stage exploring the physical language between men and women. It was playful, sexy and funny and still with the company’s unique fusion of contemporary dance and Pacific influence.

To finish the evening there was a taste of Method, a piece commissioned by the New Zealand Symphony Orchestra in 1999. Ieremia noted drawing inspiration from childhood games, which do play out in the dance to Bach’s Brandenburg Concerto No 3.

The opportunity to see a selection from the company’s range of works was exciting. The diversity in sound, image and inspiration was striking, always underscored with a dedication to the artistic heritage of the Pacific alongside contemporary dance, which resulted in a seamless merging of the cultures. Ieremia’s choreography was beautiful in its juxtaposition of grace and grit in its strength. The unique style and its presentation welcomed the dance novice while being technically proficient for the dance professional. The dancers’ beauty and grace as artists and power and dynamism as athletes was breath taking and drew more than a few gasps from the mesmerised crowd.

Ieremia’s belief in three key Samoan principles, Fa'amaoni (integrity, honesty and pride), Fa'amalosi/Loto Tele (perseverance and determination) and Fa'aloalo (humility and respect) shines strong in the work of the dancers and in Ieremia himself. The WOMAD performance, the collection of work behind it and what the company stands for is thoroughly deserving of the standing ovation it received.