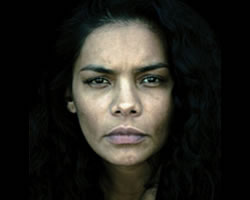 Recently wading through boxes of my old cuttings, I found a review I wrote of the very same play I am going to comment on here. It turns out my first encounter was 5 March 1996.

Exactly 12 years to the day, 5 March 208, I visit this new rendition by the education unit of the Sydney Theatre Company. How’s that for timing. How far we have all come! Though I still don’t understand why so many Aboriginals are cross and feel ‘sorry’ for themselves. What I want to know is what happened to ‘stick tobacco’? Just kidding!

My first encounter with The 7 Stages of Grieving took place at Belvoir Street, which has been at the forefront in offering space for Aboriginal theatre artists to express themselves. In many ways a lot has happened in the intervening years. But also a lot has not happened. And so The 7 Stages of Grieving still speaks to us. Wise, honest, tender, funny and eloquent, this work for solo performer still packs a punch.

Written by Deborah Mailman with director Wesley Enoch, the work first appeared in Brisbane in 1995, and formed part of the so-called Nambundah Festival held in Sydney the next year. Possibly autobiographical in part, the play – like many Aboriginal works for the theatre at this time – presents itself largely in story-telling form. Not surprisingly, that story is one of alienation, loss, dislocation and indeed grieving – but stirred around with a good spoonful of droll humour we so often get with contemporary Aboriginal art.

Some have said the work finds inspiration in Elisabeth Kubler-Ross’s ‘five stages of dying’, paralleling that journey of decline with what the authors see as ‘seven phases of Aboriginal history’ and a comparable process of  process of collective and personal grieving.

The form is as simple in structure as theatre can get, but no less affecting for that. The work has also changed. A new ending was created after the ‘Sorry’ march across Sydney Harbour Bridge; and it does take on a different light, however vague, in the wake of Kevin Rudd’s recent ‘apology’. The STC education unit has presented the work twice before, most recently in 2006 with Ursula Yovich in the role, directed by Wayne Blair.

On this occasion, we have another leading Aboriginal artist, Leah Purcell (Box the Pony) directing Lisa Flanagan in the role. While folks keeping up with Aboriginal theatre practice in this country, particularly those of us still absorbing the enormous significance of Ngapartji Ngapartji, may find little new in this version of 7 Stages, it still touches the mind and the heart.

More importantly, how fantastic it is that so many future adult Australians are getting to see this work before their judgements on matters of race and cultural identity, and what is ‘Australian history’ have hardened, simply due to ignorance – particularly in light of the decline in goodwill officiated, almost personally, over the past decade by John Howard. Who?

To take nothing away from the significance of the script and Deborah Mailman’s beautiful original performance, what has stayed most powerfully in my mind from the 1996 production was its amazing design. Much of what a reviewer experiences is squeezed out to make way for the next best thing. Only the most exquisite and succinct moments remain x-rayed on the soul.

It was the first time, in my experience, that an Aboriginal play was given an utterly contemporary design treatment. To quote my younger self:
“The eloquent set includes a square of black earth framed in white, and a grave over which hangs a large block of ice dripping cold tears…”

While we have no ‘weeping rock’ in this production, 7 Stages still ‘cries out’. The schools’ audience I sat with showed none of the delinquency we used to exhibit during our outings to the Cremorne Orpheum to see Barry Creyton in Anthony and Cleopatra. Jaffas hurtling down the aisle, and all that.

Purcell’s direction is fresh and, as sad as some of the story is, the touch is always light. Lisa Flanagan delivers an honest and engaging performance. This time the design by Bruce McKinven is less extremist, but that is probably a good thing. It is a more relaxed and welcoming environment for the young audience for which the production is intended.