Canberra Festival Of One Act Plays


Australian Stage's Brenton Amies recently took his one-act play Who the Hell is Martin Copper? to the Canberra Festival of One Act Plays. He gives us his insider report. 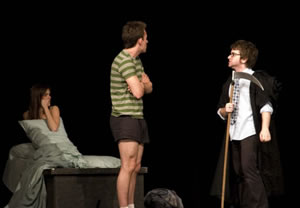 The Insider: An Entrant's Report On The Canberra Festival Of One Act Plays

The following events took place between the hours of 3:00pm and 8:00pm Sunday, 30th of September, 2007. It concerns the activities of six actors entering the Canberra festival of One Act Plays. Their names have been changed to protect their identities. They shall be here referred to as Martin, Death, Eve, Mike, David and Sybil.

3:15pm: Arrive at the venue, slightly late. Met gruffly by our stage manager. Quickly abused for our inability to navigate stage set up.

3:30pm: We are excited about a slight shift in time as we learn we may be performing at 5pm, half an hour later than we expected. Our stage is nicely set and we take the opportunity to begin a top and tail run - which is then upgraded to a full run on the news of our shift in schedule.

3:45pm: We run as far into the play as possible - that is ten of its forty minute length - before we begin the tech run. Mike (myself) is in communication with the bio-box via headset and the lights look great; from the wings! I venture into the bio-box to see how the lighting states look from afar - they still look great and I am anticipating a great visual impact for scene four - the split scene! I am told I have two minutes to check the lights by the stage manager - two minutes? But surely, we’re not performing until five?

4:00pm: We rest on our laurels as we believe we have but another hour before performance. We begin plotting properly and get throughout the play in the time allotted - thankfully; the play demanded a simple lighting plot. I use the final seconds of the two minutes I was given to say “Yeah, fine, just keep the last scene the same lighting state as the rest of it."

{xtypo_quote_right}Martin gaffer tapes David to the chair as the script dictates - although gets the tape around David’s nose and mouth causing near suffocation. Death enjoys a chuckle at the situation.{/xtypo_quote_right}
4:15pm: We’re now told we’re performing at 4:30pm again - backstage jitters begin to settle in. With just minutes till show down and we are asked by a non-plussed stage manager as to her role in the running of the show. One minute thirty seconds is spent rapidly detailing the lighting cues to our increasingly over-whelmed, but still non-plussed, stage manager. I wipe the sweat from my brow and exchange glances with Eve, Martin, David, Sybil and a cheery looking Death.

4:20pm: Nina Stevenson, festival manager, takes the stage for her introductory speech in which she mentions we are the only play to be performing that day. A few ‘chookers’ and ‘break a leg’ are exchanged as we all assemble in our positions.

4:25pm: Nina graciously announces the name of our play: “Who the Hell is Martin Copper?”

4:27-29pm: Lights down. A lull. Mobile phones are silenced. Martin takes the stage.

4:31pm: Off to a flying start. The book Martin throws at Death actually connects! Never did so in rehearsal!

4:45pm: David enters in scene 5. Martin gaffer tapes him to the chair as the script dictates - although gets the tape around David’s nose and mouth causing near suffocation. Death enjoys a chuckle at the situation.

5:07pm: Exit from my final scene. Watch from the wings and am ecstatic with the quality of work the actors are turning out in the final scene. With the exception of a dropped uno card, a fallen set of keys and sheets of paper straying from a folder onto the floor, the play was a tight ship and we’re happy with the performance. 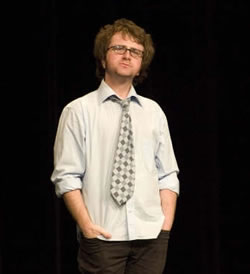 The award ceremony that followed would reveal a nomination for every award in the comedy category and a win in many of them. Including Best Actor in a Comedy to Hugo Chiarella (Martin), Best Supporting Actor to David Richards (Death), Best Production to the ensemble and Best Original Script to myself.

Nina Stevenson, festival manager had this to say: "The Canberra Festival of One Act Plays 2007 was a weekend of quality theatre and lively competition as theatre companies played off against each other for awards in the two categories Drama and Comedy. All the plays entered were original scripts of exceptional quality which meets one of the charters of the Festival which is to encourage new Australian playwrights."

We are all thrilled to have performed at the festival and would like to say that it is a great initiative for emerging amateur theatre and playwrights. If you’re keen on putting together a one act play for the festival for next year visit: www.canberraplayfest.com.au

Sam Floyd
‘Where play meets sketch’ is how Freshly Ground Theatre creator Sam Floyd describes the company’s latest offering, Every Base Covered. He might have added hand crafted, heartfelt and seriously...