He spoke to Simon Piening about the company's latest work, A City of Shadows and Ice. With more than 20 performers and 40 crew, the show includes elements of Parkour and a set literally created out of ice. 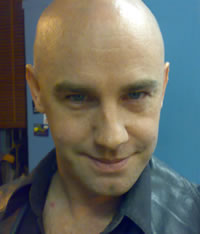 Before you started directing for Shopfront, you were working as a musician and had released a number of albums. How did you make the cross over to theatre?

Yeah - I've been a musician - a singer / songwriter, since I was young - kicking around garage bands and local clubs. In my mid twenties I split with my band and embarked on a series of character based shows - TJ Eckleberg's traveling show. On the back of an unreleased album - Leomund's Tiny Piano - I created and played theatrical seasons at The Stables and Bondi Pavilion - industrial Vaudeville we called it. Crazy eclectic shows with a guy in a fez - 'Alvin Brophy' and 'The Lovely Miranda' - using found percussion, a set and storytelling etc.

From there I became increasingly interested in the possibilities of theatre and the limits of performance. "How can we combine seemingly different elements to produce unexpected results?"

My day gig was as a part time school teacher. Around the same time as those shows, I created a huge outdoor show with boys from the south west - working out of the school I was teaching in, with an inspiring guy called Tim Carroll. The performance used massive puppets, fireworks and hip hop to connect these pretty uncooperative young guys and explore violence. It was a pretty transformative experience.

All in all, I still regard myself as essentially a musician, producer and singer. I'm just lucky that so many of the skills are the same.


Your WIKI page makes reference to a character in The Great Gatsby with the same name as yourself - what's the connection?

My wiki page? Haha. Well I took the name TJ Eckleberg from an optometrist's billboard in The Great Gatsby. Fitzgerald keeps flipping the reference/symbolism of these great big glasses on a billboard - sometimes the characters call them the eyes of God, sometimes they refer to them as 'just an advertisement'. I was young and impressionable - I thought it was a nice place for a pop singer to inhabit - trying to see further, but being caught in the machine...?

{xtypo_quote_right}I'd like the audience to walk away appreciating the amazing diversity of young people who created the work - to have an idea their stories are bigger and broader and more sophisticated than they may have once thought{/xtypo_quote_right}
There is a strong sense of social justice and community inclusiveness in your work. How did you become interested in those issues?

Hmmm. That's a good question. A big question. Well basically, I'm the son of a preacher man - I was forced to have to look at a bigger picture as I grew up. But the truth is that it was my parents and background that made those questions more real - what I saw in their religion and the way they talked didn't inspire me or tally with what I was told. When I started playing guitar, they really hated that and actively opposed it - and that was the end of any belief they would stand by me no matter what. I guess that's where my feeling for the outcast or the margins come in. I've had a life of enormous privilege, don't get me wrong, but I think my parents not accepting me as a musician taught me the importance of having a story to call your own, and being affirmed in that.

Also I think my time as a teacher in Sydney's south-west had a massive impact on who I am. It was harrowing. I was forced into contact with young people from radically different backgrounds and I had to learn new ways of coping and new ways of knowing. It was clear much of what I was taught growing up was misleading to say the least. It forced me to realize that things are not simple, that being a good teacher is an enormous challenge and that the problems in our society are actually bigger than we often allow.


Shopfront have developed a reputation for creating large scale, community driven, performance installations. How did you become involved in Shopfront?

As a teacher I came across "Playbuilding" a book by Erroll Bray - one of the founders of Shopfront. I found his ideas really inspiring... Particularly the notion young people have a right to their own story, and that you can make work based around that. I started directing workshops and little productions here - and moved into sound design when they realized I was a musician. A few years (and a year in London) later, the Artistic Director position came up and I jumped at it.


A City of Shadows and Ice is your largest work to date, incorporating Parkour and a set literally made of ice. What exactly is Parkour and where in the Yellow Pages do you look to get a set made of ice?

Lol! Ummm. Parkour is the 'Art of displacement' - moving from point A to point B as efficiently as possible - often in an urban environment. It's a movement that originated in France. It's similar to free running... The stuff Sebastian Foucan does in the chase sequence at the beginning of Casino Royale. Some of the young people got excited by it, and we thought it would be fun to try.

As for ice - hmmm. You look under trial and error in the yellow pages, I suspect. ;) We've had a shipping container out the front for months now, so we've been trialling various methods of creating the walls and doors that slide through the space. Like the parkour, it takes time and room to experiment.

We don't really parkour in the show - We use elements from it to infect and infuse the movement with the feeling and energy and excitement of it. Just as I'm no world expert on ice, neither am I an expert on parkour. But we can borrow elements to give this show a distinctive flavour.


The show involves more than 20 performers, 40 crew, as well as some extraordinary talent that you¹ve brought in to help with the show. Where do you begin on a work of this scale?

God! Well it takes a team, that's for sure. We have amazing people on the ground down here. Joey [Ruigrok van der Werwen] is one of the most outstanding designers in the country. Simon [Wise] has production managed a vast array of outdoor performances for an incredibly diverse list of companies. Bernie [Regan] the associate director is ex legs on the wall - and we've worked together for the last three projects in one capacity or the other. As for Entropic - they played the launch of my last album! I can't imagine having a more generous or capable team.

I begin work on this scale as I would begin something smaller - with the idea, and then step it forward to find the best people I know. We're lucky at Shopfront because we almost always have an amazing roster of people to draw from.


In a world of ice, fire is life. Where did the idea for the story come from?

The original idea was inspired by an aboriginal myth, the notion of separation and difference, and ideas that arose from playing with the ice and with fire. The end result is a story of its own - with an epic feel. I guess a lot of the story derives from the notion of warmth in a hostile and cold world - Who has it? Who keeps it? Who shares it? Who needs it? This is the question that keeps recurring throughout the performance. I think it's a question that keeps coming up in the Australian contemporary landscape.


The project is in part a response to the Cronulla race riots and asks us to "think about the walls we build, the worlds we create and how we can see others for who they are." What do you hope audiences and participants will come away with from the project? The show is a poetic treatment of a lot of those questions - I think it evokes a sense of wanting to know who belongs and who doesn't. I'd like the audience to walk away appreciating the amazing diversity of young people who created the work - to have an idea their stories are bigger and broader and more sophisticated than they may have once thought. To walk away wondering how we could create a society where we keep each other warm - where we choose to keep the fires burning rather than stamp them out...


So how do you top this? What¹s next for you?

Ah dear. I hope some sort of break - but I suspect simply bump out. Lol! Next year we create another show in public space - 'lost toy story' using found writing, real stories of lost toys and life sized glow in the dark sculptures of toys to create a public performance installation...

But in the meantime, I gotta get that new album out... It's only taken me five years...

A City of Shadows and Ice is a free event and opens August 17. Further information»

For me the whole evening was a revelation, a thrilling exposure to a tradition I am unfamiliar with.