Alyson Campbell has directed in the UK, the US and Australia. Since migrating to Australia in 2000 she has co-founded Wrecked All Prods with playwright Lachlan Philpott and the company has produced Lachlan’s plays Bison and Catapult. Alyson has also directed Tony Kushner’s Terminating and Jean Genet’s The Maids for the company. For Red Stitch Alyson has directed The Day Room by Don DeLillo (2004) and Martin Crimp’s Fewer Emergencies last year.

Alyson is currently undertaking her PhD at the University of Melbourne, researching Sarah Kane’s theatre and she spoke with Paul Andrew about this new Red Stitch production opening this week. 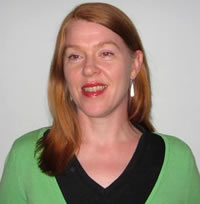 Alyson what do you love about the works of playwright Sarah Kane ?

I am excited by Sarah Kane's work because of her experimentation with form and the absolutely precise organisation of language. Maybe above all else, because she was a believer in the theatre event itself and the idea that the experience of being in the theatre could have an impact beyond the literal thematic content. She called the theatre she wanted to make 'experiential' - it was about feeling as if, as a spectator, you had experienced something yourself rather than just sitting back and 'speculating' on something cerebrally. She wrote theatre that resists being anything but theatre (despite ideas people have had about, for example, Crave being an ideal radio play, or 4.48 as not theatre but literature).

I can't really remember when I first read Kane - I think it was quite late, as I do know that 4.48 was the one that really interested me from the start. However, I remember quite clearly where I was (a very ugly newsagents in West Ham, London) when I bought the Guardian and the front page carried the news of her death.


Kane's work is "closely protected" – why?

I think the work has been closely protected, though it is less so now. Following her suicide there has been a bit of a ghoulish obsession with Kane and the estate has tried to protect the work – in terms of premieres in particular. As time has gone on and the works have been produced and critiqued more widely, there is less concern about rights. But I did start asking for the rights in 2002/3 so it has taken a while! A company in Sydney got the rights to 4.48 and then had delays in producing it, so everything had to wait.

The work is really hard to do! I thought I was ready after all this time, but it is a huge challenge to find a way to stage the play – how to balance the aural soundscape with a visual landscape? How to offer a way for the audience to enter into this landscape and ‘feel’ it? It’s certainly the hardest play I’ve ever worked on - and actually there is no such thing as getting it ‘right’: there are only huge, hard choices, and you have to trust that you’re going in the right direction.


Theatre history is embroidered with the sacred and profane aspects of mental illness - where is Sarah Kane located in this cultural lexicon?

I’m not sure I’m the one to answer this question. I think I’ll give the answer Kane gave when asked what she thought of Artaud, (whose work she came to very late in the day, by the way). I’m paraphrasing widely here, but she said that on reading Artaud she thought, ‘now that’s what I call sane.’


Sarah Kane is often celebrated today for her extreme in-yer-face theatre – who were her major influences?

I really hate that Kane is put in the ‘in-yer-face’ camp – it has all sorts of baggage and the various problems inherent in putting individual, idiosyncratic writers into one basket. I prefer her own term for what she wanted her work to be: ‘experiential’. By that she meant a theatre that was not about sitting back and ‘speculating’ on a subject cerebrally and from a comfortable distance but about being put through an intense experience. It is, for me, all about the spectator’s experience – not the writer’s or the actor’s. Aleks Sierz – who coined the term in-yer-face theatre – has told me that he sees the terms experiential and in-yer-face as more or less synonymous – and in a sense he’s right, in that he sees the experiential as the aesthetic of in-yer-face – but, much as I respect his work, I do think the term in-yer-face does not serve Kane very well, (apart maybe from drawing crowds).

Perhaps the best thing I can say is that Kane wanted theatre to be like football, (and she was an ardent Man Utd fan which, as one commentator quipped, is an ironic choice for a depressive) or like a Jesus and Mary Chain concert, which made her ‘long for a theatre that could speak so directly to an audience's experience.'

{xtypo_quote_right} Kane wanted theatre to be like football, or like a Jesus and Mary Chain concert, which made her ‘long for a theatre that could speak so directly to an audience's experience.' {/xtypo_quote_right}For her, towards the last two plays, it was about the actual performance in the theatre -  'performance is visceral. It puts you in direct physical contact with thought and feeling'.


Tell us a little about her major works - preceding her final work 4:48?

She wrote some early monologues which are unpublished at her request. Her first play Blasted premiered at the Royal Court in 1995 and caused a big furore as critics thought it was violent and brutal without a social imperative. They missed the way she used formal composition to make a point about the state of Britain and war. Followed by Phaedra’s Love – the most ‘traditional’ formally, Cleansed - a real tour de force which questions the power of love in an extreme situation. Interestingly, while critics found it difficult and nihilistic, it is actually imbued with a faith in love that has gone by the time she wrote Crave. Crave marked a radical change in direction for Kane formally – with its emphasis on the musicality of voice and the power of performance. Critics liked it because they thought Kane had given up her ‘shock’ tactics and mellowed – but actually it is with this play that Kane loses the faith in love that has motivated the earlier plays. It is often seen as a ‘companion piece’ of 4.48 Psychosis – partly because they share a move to a more musical or concrete use of language.


You have been researching her work and her life?

I don’t really research Kane’s life at all – my focus is on the composition and formal experimentation in the work, and its wider social or political commitment – something widely overlooked in the hurry to, for example, write off 4.48 Psychosis as a ‘suicide note.’ A focus on biography is something I’m trying to avoid – although a youthful suicide is always attention-grabbing.


Tell me about the poetic language use and musicality she employs?

By the last two plays I’d say the real effect – or affect – of the work comes from the specific, material qualities of the language. I’d suggest the direction Kane’s work takes for Crave can be seen to be at least partly the result of being able to hear the work aloud. Kane described a reading Vicky Featherstone directed: ‘Vicky had orchestrated the rhythm and by listening to it I realised how much further I could go in terms of musicality.’ Featherstone herself said that what Kane ‘wanted to do was to find out if you could arrive at meaning through rhythm and whether language could become arbitrary. … it was written for its rhythm rather than meaning through the juxtaposition of lines’ (in Graham Saunders  ‘Love me or kill me:’ Sarah Kane and the Theatre of Extremes, 2002).

For me these statements are very telling, raising the issues of the relationship of language to meaning, and rhythm to meaning. They throw into question how one can talk about a work in performance, particularly theatre, that privileges non-significative impact – the impact of rhythm, for example - over meaning, especially when our modes of analysis are overwhelmingly fixated on content/meaning paradigms. It is this focus on musicality and language as concrete, present material, rather than merely signifier for something absent, that really interests me for my research.


A lot of attention has been given to the radical structure and explicit language she employs...

It makes you work very hard – both as a practitioner and as a spectator. Holding a mirror up to mental illness is a recurrent premise in Kane's work?

Edward Bond’s thinking proved really intrinsic to where she went with 4.48 psychosis. This is directly from my program notes but it’s key for me:
Bond has suggested that there is a ‘wider political dimension’ to her writing and, while many have interpreted the last work as a narrowing of focus onto the self that precludes a social or political concern, I feel strongly that Kane has not retreated from this wider dimension. A thematic triangle scaffolds the play, joining the dots between sanity, writing and religion and questioning the value of ‘sanity’ if its product is the current state of the world, in which amongst the comfortable there is a selective numbing against its horrors. Bond writes about ‘social madness,’ asking ‘how is it that most of us appear to be sane but we live in societies that are mad?’ The play uses an array of religious terminology to suggest that we are ‘proselytes to sanity’ – as a society we have been converted to a faith in (a misplaced) sanity as religion.  Kane’s last play, though clearly motivated by a deeply-felt personal anguish, opens up this question in a vibrant, theatrical form that leaves behind a more traditional dramatic model that might allow us to ‘speculate’ and see this world as belonging only to its tragic playwright.


What aspects do you feel it is important to evince from this play for a savvy independent theatre audience?

To try not to dumb it down and make it palatable or easy. It’s not easy, and it doesn’t work the way a lot of theatre – too much theatre - works. I think one needs to trust the audience.


This is not a play for the feint hearted - what should audiences leave behind at the door as they enter the theatre?

Preconceptions about theatre and sanity.