small metal objects | Back to Back Theatre 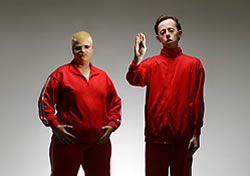 The black storm clouds were cause for concern for the audience poised in tiered seating under the ominous grey sky at Federation Square for the opening night of small metal objects. Thankfully the Melbourne weather behaved, turning up the cool wind appropriately, enhancing the moody atmosphere of the open-air stage.

Back to Back Theatre’s smash hit production returns in a whirlwind Australian tour, the sell-out of the 2005 Melbourne International Arts Festival and more recently the 2007 Sydney Festival. Inspired by the musings of ensemble member Sonia Teuben – who I had the pleasure of meeting briefly after the show, and whose enthusiasm is infectious – the piece explores the joys and difficulties of human interaction, friendship, sexuality, loneliness, displacement and the experience of being invisible in a chaotic, status-driven world.

By setting the performance in a “civic space”, positioning the audience effectively on their own stage, and releasing the “real” performers out into the jungle of the CBD at the tail end of peak hour, director Bruce Gladwin and devisors have created something utterly original. As the director notes, there are two narratives at play here: one is a conventional drama involving unlikely interactions and shady deal-making, while the other involves us, the audience, positioned conspicuously, on display in a public arena, costumed with headphones. Unable to play a passive role, the audience must first work hard to even determine who and where the performers are in the busy urban landscape, and then endure (or enjoy!) being the focus of the public’s gaze as passers by look, point and photograph our bizarre performance. Though a play is being staged before us, it is the audience that constitutes the spectacle; we are an installation, the watchers being watched.

Unwittingly then, the general public become extras in this multi-layered visual feast, and the experience is a delight for avid people-watchers. Federation Square provides the perfect backdrop, entertaining us with a multitude of bit-players: tourists, office workers, students, children and cyclists all have walk-on parts and the effect is engaging. Heightening the drama – both real-life and staged – is the wonderful moodiness of Hugh Covill’s score, providing a melancholy atmosphere that suits the poignancy of the mostly naturalistic dialogue. Some fairly heavy thematic material is touched upon in the restrained script, and left not fully explored. This is not a bad thing. The play seeks to affect its audience, but not to preach or deliver messages heavy-handedly. The performances are solid, and the actors do well keeping to a minimalist style – the nature of the show allows for all the subtleties of more filmic performances in keeping with the real-life environment.

The early-Autumn wind seemed to die down as the performance ended, as if on cue, and the approaching storm passed us by unscathed. Having been taken on an exhilarating journey, and weathered the storm, I felt much like the character of Steve in the final scene of the play: much better.

As an outdoor production, audiences are advised to prepare for all weather conditions.