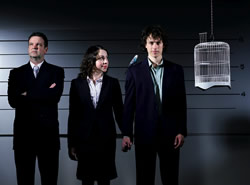 Nineteen year old Martin Porter (Luke Ryan) lives in Bendigo, plays 'footy' with the local team and works as a fitter and turner. When ASIO officer Alex (Dennis Moor) calls him off the field in the middle of a game and proposes that he become a spy, Martin's naive patriotism and the promise of the excitement of being someone, makes it impossible for him to refuse. It is after all the 1960s, with the cold war in full flight and film and television programs a plenty painting the 'joys' of spying in a bright and lurid light.

The Spook is yet another award winning play by Melissa Reeves (Who's Afraid of the Working Class). The work was inspired by the true story of a young man recruited by ASIO in the 1960s and asked to masquerade as a communist whilst spying on his local party branch. However, as Reeves assures us in her program notes, The Spook is a totally fictional and sometimes ludicrous version of the story.

Before the lights even go up the sound effects evoke the period with snippets of themes from television and film – the sounds of The Man From Uncle, and James Bond among them  – immediately creating a comically sinister atmosphere. Composition and Sound Designer David Franzke clearly had great fun putting it all together. Then the lights go up on a set designed by Anna Borghesi which is open and flexible, and beautifully captures the period, even to the laminex kitchen table around which the party meetings are held.

Joining the South Bendigo Branch of the Communist party brings Martin into contact with the branch president  Frank (Kevin Harrington), a pretty ordinary and unimaginative bloke who is more concerned with keeping up the sales of the party paper, The Tribune, and recruiting more party members; the impact of larger world events, such as the Russian invasion of Czechoslovakia, tend to pass him by. A total contrast to Frank are a local Greek couple,  Eli (Maria Theodorakis) and George Tassekis (Tony Nikolakopoulos). These two take young Martin under their wing, broadening his political knowledge and adding some much needed life and passion to the meetings. Martin is the classic naïve Australian so well known from our plays and our screen. He does his best to play the double role of party member and spy,  but sometimes finds it hard to balance his two lives, neither of which he is particularly adept at.

This production is clearly played primarily for comedy and the characters tend to the stereotypical. The ASIO agent Alex is particularly farcical, trench-coated, be-hatted and sun-glassed. His initial entrance is amusingly melodramatic. There are numerous memorable one liners, but there is also a darker side to this work a side that comments on  the power of government agencies to negatively impact on the lives of ordinary, basically good people. This is a theme which has resonance with our own times when we are asked to be alert, but not afraid. The 'enemy' may no longer be red, but social anxiety at the perceived threat is just as real. However the emphasis on comedy tends to water down any more serious message.

The Spook offers a night full of laughs and a comic insight into Australian life in the 1960s.