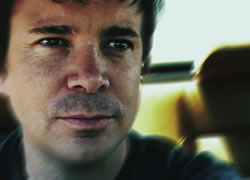 “The American Dream has run out of gas. The car has stopped.” -  J. G. Ballard

There’s a certain air of ambiguity inherent in the idea of the car. On the one hand, the car transports, opens up, makes possible: the car is a four-wheeled ticket to freedom. On the other hand, that of Neil LaBute’s Autobahn, it’s a claustrophobic, cell-like space, both enforcing intimacy and yet rendering it impossible. Far from enabling escape from life, the car carries it around, as it might do a passenger, intensifying it by virtue of confinement. Marshall McLuhan once said that the car had become “an article of dress without which we feel uncertain, unclad, and incomplete”. LaBute shows how, in contrast to this, the car actually compounds, rather than relieves, these tensions.

Presented in Australia for the first time by Act-O-Matic 3000, LaBute’s cycle of plays is the very definition of the term ‘variations on a theme’. A series of slow-burn mono and duologues, each set in the front seat of a car, the cycle serves, sometimes too explicitly, as a kind of social rap sheet. Waxing at a rate of knots, the characters talk themselves into submission, making noise but not communicating. The unfixed and unshared meaning of words is a recurring subject of the dialogue, however subtle; other topics up for discussion, like symptoms of a fatal illness, are somewhat more blatant in their relevance. The stories all deal with the grimy underbelly of a picture-perfect façade: the spit polished image of so-called normality projected by the middleclass. Incest, rape and infidelity all get a look-in here, as do drug use, family violence and emotional abuse. There’s the woman who convinces herself that her husband didn’t beat their foster child, which he clearly did; there’s the increasingly frantic husband whose wife suggests that she’s been raped in order to avoid telling him that she’s been unfaithful; and there’s the father who, driving cross-country, asks his teenage daughter if he can stroke her hair. That all of this is offered up with a sardonic elbow to the ribs merely adds to the air of decline and fall that so thoroughly pervades the work. The term, I believe, is gallows humour. There’s enough of it here to fill a car thrice over.

The set is about as simplistic as they come, consisting of two seats directly facing the audience, with a steering wheel to one side (the left side, as it happens, thus confirming the locale of the piece in case the unnecessary if serviceable accents somehow fail to). Sitting atop a large white sheet that's been painted to resemble a roadmap, these chairs stay like this for the entire production, with only the characters in them changing. What with everyone wearing seatbelts, this makes for somewhat static theatre, with director David Ryding failing to add much visual interest to the proceedings. Only Stelios Karagiannis’ lights do anything to add some ocular variety, and even then the effect is limited, evoking little more than time of day. The most probable riposte to this, I imagine, is that the words and the actors’ performing of them are strong enough on their own, but while there’s certainly some truth to this, there isn’t quite enough of it. While good, the script and the genuinely talented actors are ultimately elements of the show, not the whole.

Indeed, one can’t help but wonder why Autobahn belongs on the stage in the first place. What makes it particularly theatrical? Dialogue-heavy and visually inert, one can just as easily imagine the piece being performed as a radio play. To be honest, most of the notes I wrote for this review were written, head down, during the last piece of the evening. Perhaps this was carelessness on my part, but even so, the results were telling. Regardless of my methodology, I didn’t feel as though I’d missed a thing.

To be fair, putting these pieces on stage does allow for a certain elucidation of the emotional distance inherent in the text, which manifests itself in literal terms as actual, physical distance. The space of the car, with its parallel seating, along with the driver's need to concentrate on the road, results in a lack of eye contact between the vehicle’s inhabitants, not to mention the absence of touch. The characters do look at each other in these plays, and even occasionally make contact, but these encounters are always fleeting and awkward and perhaps even immediately regretted. They’re embarrassing. As a result of the visual blandness of the piece, these flickers of gesture and movement become all the more striking and important for the mild ruptures they seem to cause.

However, this point is made quickly - in the very first play of the evening, in fact - and there’s little development of it thereafter (save for the heavy petting of two emotionally manipulative teenagers, for whom emotional distance exists in spite of their adolescent attempts at physical closeness). Along with the increasingly predictable flow of the individual pieces, which either end with the subversion of the audience’s expectations or else with a moment of sad reflection for the characters, this makes for a production that, while never particularly dull, gets less and less interesting as the evening wears on. In short, neither the nature of the plays themselves, nor the company’s visually arrested staging of them, can quite sustain the audience for the number of pieces they’re asked to endure. Seven seems about two too many, however funny the jokes or perceptive the critique. There’s simply not enough variation here to keep this theme on the road.