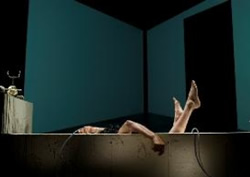 The Lady Aoi is based on the Japanese Noh play “Aoi no Ue” and while the author of the Noh has remained unknown, The Lady Aoi was written by Yukio Mishima based on the legendary characters of Lady Aoi (pronounced tonight as “Ow-ee”), Lady Rokujo and Prince Genji. Mishima died by seppuku (highly ritualistic Japanese suicide true to samurai tradition) as a final objection to modern Japanese decadence – and he would probably have risen and done it all over again on seeing Black Swan Theatre Company’s production of The Lady Aoi.

A seemingly simple set – with a triangular room (used for perspective – the smaller the room gets the larger people appear), a ‘bed’ that looks a little like a kitchen sink and stark white backdrop - is quickly transformed into a decadent show of media projections, gratingly aggressive noises and a mass amount of black liquid most likely meant to resemble blood.

As Lady Aoi lies dying in a hospital, Lady Rokujo – ex lover of Prince Genji – has become so jealous she unconsciously transforms into a living spirit to haunt Aoi quite literally to death. The traditional story of Lady Aoi is filled with poetic, flowing speech and beautiful dreamlike imagery but unfortunately none of this was apparent on the night.

The first scene of Black Swan’s The Lady Aoi is without dialogue and at that point I was hopeful that it may draw on the attractive actions apparent in the traditional Noh but as soon as the actors opened their mouths, that hope was crushed. It may have been the playbills emphasis on the Japanese roots of the story or the opening scene's silences, but grating Australian accents did not suit the production. My attention during the long monologues was taken over by the media projection in the background and also during the two minute length of inarticulate screaming where the actor’s Australian enunciation took over so much that all I could hear was a shrill, melodramatic whining noise. It seemed that the dialogue lacked all aspects of beautiful theatre – poetry, self assurance and most of all subtlety although this may have been contributed to by the English translation.

The use of visual media with its projections of dripping blood, long hair and the ocean was a minor but competent example of how media can be used within the theatre by small companies who may not have considered the feat.

Regrettably the attempts at passion and sexiness were lost in The Lady Aoi leaving myself and my friends not feeling aroused or shocked or haunted, instead we felt nothing. The movement in particular missed the mark, trying to provoke some emotion in the audience but, unfortunately, leaving no lasting impression. The addition of a bright and apparently sexy nurse was a strange one, and could be said to reflect the obsession with the EGL/mod/Anime way of life in modern Tokyo culture - although she was not Anime/EGL enough to confidently say this was so.  I often found myself focusing more on the action of dancer and choreographer Claudia Alessi (Aoi) who must now be the country's most talented writher and convulser, than the movement as such.

Black Swan advertises The Lady Aoi as a play which “crackles with sexual tension, dark energy and hidden aggression...supernatural undercurrents and haunting images” and although it can definitely be seen as supernatural, if you are a film buff you will see maybe too many references to films using similar imagery such as The Fifth Element, both versions of The Ring and obsessive jealous love from Butterfly Kiss. Although a very bold attempt to lift the Perth theatre scene with something mysterious and sharp, The Lady Aoi was perhaps far too filmic, raw and plain for the stage and may have translated better to a short film where all the lack of passion, sexiness and poetry would have made complete sense.