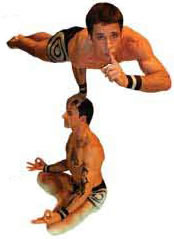 The Tasmanian Circus Festival began in ’89 and has grown to be the national celebration of contemporary circus in Australia. The last time I visited Tasmania was for this event nine years ago. Back then it was an inspiration and the setting was absolutely idyllic. With those glowing memories I had high expectations for the festival this time around.

I flew into Launceston on the Thursday morning before the festival and was greeted by a friend at the airport. Before heading out to the site, we picked up supplies -  gas for the cooker, water and food.

The festival setting was remote bushland with tents and the odd campervan as the only accommodation. Those not used to camping may consider it “roughing it,” but really it was camping in style with facilities - toilets, showers and the all-important bars and café’s serving delicious food cooked in temporary kitchens on site. In addition to this, the ZERO WASTE policy supported the recycling, composting and reuse of packaging and other waste.

The site, 50km from Launceston, didn’t take long to drive to and once through Lilydale, the final destination was the beautiful Loan Star valley in the Panama Forest, a flora and fauna reserve. The last stretch to the site was a dirt road with signs signalling “Tasmanian Circus Festival 2007.” February 10th, 11th, 12th was crossed out with “SOLD OUT.”

We parked and unloaded. The camping and festival sites revealed themselves as we followed paths and cut across openings surrounded by tall eucalypts and Blackwood trees. The clusters of tents already pitched had been home to participants of the training program who had already been on site for a week.

It was the last day of training so after dumping my bags by a tent, I toured the site to find pockets of activity at the workshop tent, clowning in the Tiny Top tent, aerial ring at the Panama Rig, trapeze on the flying rig, tight wire and more. There had been a wide range of training in various circus disciplines and performance for the last seven days. In the evening the Australian Circus and Physical Theatre Association (ACPTA) held their last talk for the training project, afterwards there was a window of opportunity to grab a bite to eat before the training project’s nightly performance commenced with Justin Sane as MC and a range of performers he had gathered throughout the day.

Friday, a rest day from training at least, saw final preparations for the arrival of the general public. The evening concluded with the opening of the late night festival club, the Bedouin. The venue had a dress code and as dusk gathered, campers emerged from their tents in their finery and partied on to the wee hours.

Saturday, the first day of the festival, opened with Slipstream Circus, Tasmania’s own youth circus strutting their stuff. This kicked off a flurry of activity over the following three days of the festival. There where workshops to participate in, performances throughout the afternoon and well into the evening, showing on the Main Stage, the oval, the Blue Bar, in the Bedouin tent, Tiny Top tent and Playground Café. As well as stalls selling their wares and delicious food.

The wonderful thing about this very special event, aside from the tranquil setting, the friendly buzz of energy and number of intimate performance settings, is the range of performers who get on stage and entertain. There are locals and internationals; there are a range of performers from street and circus performers to MC’s and musicians; there are performers with 30 years experience working alongside recent tertiary graduates and youth circus participants. This range of people from different backgrounds and at varying stages of their careers encapsulates the diversity of skill, experience, support and sharing that the festival fosters. Hand in hand with this was a strong sense of community supporting a fantastically organised event that showed great care for people and the environment in which we found ourselves.

The question is, did the festival meet expectations? It was exactly the same as last time, a little piece of paradise.

Stand by for more Circus Festival fun in 2008 on The Tablelands of Far North Queensland. Keep updated with more information at www.circusfest.com .