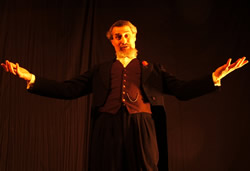 Directed by James Adler and performed by the versatile Phil Zachariah, Eagle’s Nest Theatre’s production of Dickens’ classic story is a good, even welcome idea, but falters somewhat in the execution. Is the text simply too long? Dickens’ writing is often deliberately, hilariously florid, but this of course makes for long, winding sentences, as well as continual, abrupt changes of tone and more than a little Victorian over-kill, and this production constantly gives the impression of being rushed, of getting it all in, just to keep the time down. The effect of all this haste is what you’d expect, the changes of character not always successfully managed, or only in the broadest brush, most stereotypical way, the diction far from intelligible, and most fatally, most of the meaning simply lost.

All this is a pity, because this famous, almost too familiar story still has a lot to say about compassion triumphing over greed, shared humanity over loneliness, and delight over misery. The actor, too, is very skilled, extremely fluent in voice and movement, and his authority over the role and the audience is complete. The storyteller need not have been performed as Dickens, and the decision to do so may have locked Zachariah into some stagy, quasi-nineteenth century clichés, somewhat jarring to the modern eye and ear. The lack of music, and the poor lighting did not help matters, either. The piece, as so performed, has few moments of rest or reflection, and needs many more. We need to see the actor in almost a less versatile, less strenuous, more appealing way, we need to follow and be moved by the stages and realisations through which Scrooge painfully rejoins the human race. It was regrettable on this occasion to see this rich material and capable performer not doing justice to one another, but maybe next Christmas…