In 1999, Sue Nattrass began her appointment as Artistic Director of the Melbourne International Arts Festival and immediately took an enormous gamble by including a new play by Glynn Nicholas and Scott Rankin - a gamble because Certified Male was certainly not the usual Arts Festival fare. For one thing it was a comedy and, perhaps more ominously, it was Australian. The decision proved to be inspired, and the play became the undisputed smash hit of the Festival. Seven years later Certified Male has had numerous revivals, toured extensively throughout Australia and has received a number of international productions, playing to packed houses and rave reviews wherever it is performed. Next year, Certified Male will premiere in the UK and for the Director of the Glynn Nicholas Group, it may just mean the start of something very big.

Born in Bristol in the UK, Glynn moved to London while he was still a baby - eventually “my parents tracked me down” and the entire family later moved to Cardiff, Wales where he spent his teenage years. At the age of eighteen and as a young man in search of adventure he applied to come to Australia. After waiting a year and a half for the application to be approved, he finally arrived at the age of twenty and survived initially by taking jobs as a gardener and a labourer.

Up to that point he had no experience as an actor and the impulse to perform came about as a matter of necessity. He began travelling and for the naturally gifted entertainer, singing was an easy way to make some money. “I began busking with guitar in hand when I was travelling around Europe. I only knew three songs. “Blowin’ in the Wind”… and another two. I gradually moved into comedy and mime.” 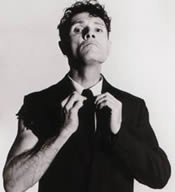 In an environment where there is literally nothing stopping the audience from walking away, he honed his instincts on the street, developing an inclusive, interactive style of performance. “I’d arrive somewhere and there’d be 30 other performers – so how do you stand out? I’d work out strategies to make sure I was seen.” The strategy obviously worked and he regularly managed to attract audiences of more than a thousand people at a time, bringing streets and town squares to a standstill wherever he performed. In his ten-year career as a street performer he won numerous international awards including the Australian National Championship in 1986.

In 1987, he began to take his performances indoors, creating a number of acclaimed one-man shows and small ensemble pieces. These early productions contained all of the style elements he has now become renowned for - highly entertaining works performed with enormous skill and a lightness of touch. He easily combines a range of comedy styles and always with sublime moments of compassion and generosity of spirit that linger long after the performance is over.

His transition from performer to producer occurred gradually over the next few years and came about almost before he had a word for it. “I kind of paid everyone and arranged the venue and then (afterwards) I thought ‘I must’ve produced that.’” Since those early days he has developed a far more sophisticated approach to producing and has a string of hits to his name having built a formidable reputation for creating quality work.

One of the reasons for his success as a producer is his passion and deep understanding of performance – “a lot of producers treat actors like warm props. They don’t understand how performers tick so it’s all about the dollar, and if you do it just for the money you’re going to break your heart.” For this consummate performer, the quality of the work is absolutely paramount - it’s a creative and business strategy that seems to be working and one where everyone wins.

His mandate if he has one, is to ‘open up’ theatre - to create opportunities for the audience to experience high quality, entertaining work at a reasonable price. There is a trust built up between them and his company – indeed he refers to them as friends - which is why they will tell their friends about the show and come back again and again. For him each show must never fall below a level of excellence – “if an audience member walks away thinking that was ‘just alright,’ I’ve lost a customer.”

At the same time, he has been equally vigorous streamlining his business operations, working with venues, artists, tourism bodies and marketing companies to reduce costs. “I’ll keep my management costs down, I’ll keep my fees reasonable – venues need to do the same. Without that happening, there’s going to be very little opportunity for shows to have a chance – new shows particularly… It literally can be something as minor as a rock’n’roll concert going on sale on the Monday and clogging up the phone lines and you lose $30,000 in sales. And that’s it. You don’t recover that. That’s how delicate it is. You can have the best show and the best marketing, but if you can’t buy a ticket…?“

It has taken over a decade but he has succeeded in creating an Australian market for quality, original, home-grown theatre - what’s more he is set to become a major exporter of Australian theatre to the world. Next year, Certified Male will open in the UK with assistance from the Federal Government’s Undergrowth program – funding designed to help Australian arts companies get a foot in the door of the major market of the UK. But Certified Male, he hopes, is just the tip of the iceberg. He has performances scheduled for the Glasgow International Comedy Festival and the Liverpool 08 Festival (curated by Robyn Archer). If Certified Male takes off, he has another six shows ready to tour and a further six on the drawing board. “The idea is to basically duplicate the Glynn Nicholas Group in the UK.”

If you have ever experienced a Glynn Nicholas performance you can’t help but be struck by his natural ability to put the audience at ease - a quality that no doubt contributed to his selection as sidekick to Australia’s most famous teddy – Humphrey B Bear. He earned the gratitude of mothers all over the country and baby-sat a generation of Australian children brought up in the early 90’s – the episodes of Here’s Humphrey in which Glynn appears are reportedly the most repeated episodes in the show’s 40-year history.

He is passionate about the power of theatre and is moved by some of the feedback he has received after his shows. Certified Male has had a particular resonance for audiences. He recalls stories of dislocated families that have been reunited and men who contacted him after seeing the show, that were encouraged to reconsider their behaviour - “theatre is a very special, holy place… I’m not into art, per se – it’s got to be entertaining. (But) it’s better if it says something too. Go and see any comedy show and you can laugh like a drain. Five minutes later you can’t remember a thing…[theatre gives you] something to ponder, or something that challenges you. Theatre should hold up a mirror and make you think.”

His current project, Oh Come All Ye Stressful, is a good example of his performance philosophy at work. He has worked with the new management of The Palms at Crown - the stunning new refurbishment of the former Showroom - and developed a Christmas show that will give audiences the chance to “let (their) hair down - but also to have a think about the world and our purpose in it.”

“We will be having a Christmas party and a serious laugh - it’s a variety show, but not just a bunch of acts thrown together. This show will have an element of playfulness, competitions, a raffle. I’ll get some people up on stage and do some mime with them.”

But while the emphasis is definitely on entertainment, it will also include opportunities for people to consider the true meaning of Christmas. “Christmas is a complicated time for many. It’s about despair for some people.” Through his association with Concern Australia, an organization that seeks to provide “support and advocacy for disadvantaged groups within the community” he has invited a number of streetkids to be involved in the production. They will be distributing programs during the show and audiences will be encouraged to make a gold coin donation to the organization - “given the opportunity people are generous - as long as they’re not made to feel guilty. It’s a small gesture but maybe we can raise a few thousand dollars.”

The rustle of leaves, cleansing and enlivening the stage, cultures coming together through the sound of the Didgeridoo: close your eyes and feel the passing of the moon, the sun and the earth awakening. The marriage of sounds coming from the musicians – storytelling never sounded so beautiful.

It is an amazing tour de force to perform all three of Stravinsky’s early ballets in the same concert. A tour de force for the conductor, for the orchestral players, and for the audience.