The company oscillates between presenting traditional and modern works, so the pairing is not far-fetched programming. And the dancers are always up for the challenge, able to shape-shift into the demands of whatever is thrown at them.

A little-known Marius Petipa ballet from 1900, Harlequinade is light on the tragedy and drama of a classic like Giselle. The flimsy plot line is really just a chance for fun dancing displays and a few main characters to flex their performing chops. The joyous movement, not so much the exaggerated theatrics and heavy-handed mime (influenced by the Italian Commedia Dell‘Arte style), is the drawcard of this production.

Choreographer Alexei Ratmansky, assisted by Tatiana Ratmansky, have painstakingly reproduced original Petipa choreography and filled in voids with their own interpretations when there was no history to guide them. Robert Perdziola’s sets and costumes give everything a bouyant lift while music (performed by Orchestra Victoria) by Riccardo Drigo keeps things moving at a brisk pace through the tight two acts.

While Act I gets bogged down with over-worked narrative exposition and caricature, Act II is the dancing bullseye. Essentially one big wedding scene with an extended, avian-themed pas de deux, it is filled with serpentine patterns, ensembles framing speciality dancing and parades of children (dressed as mini-me’s of the adults) in continuous lively displays. It showcases more than dramatic dancing, with character (folk) elements, difficult jumping patterns and the expected displays of multiple turns.

Leading woman, Benedicte Bemet as love interest Columbine, is delicate and crisp with an exciting technical precision. She has a soft yet extremely focused quality, nicely foiling the spiky energy of Chynoweth.

Decked out in white suit with sleeves well-past his hands, Callum Linanne as Pierrot plays the foppish clown with a droopy yet physically precise quality. Sharni Spencer is a warm and radiant Pierette. The ensembles are colourful, large and full of ballet kidlets – always a crowd-pleaser!

Harlequinade is entertaining and goes down easy, despite some dated elements. While not up there with the heavy-hitters of the ballet canon, it’s a pleasant winter warmer for a cold evening.

Harlequinade is a co-production of American Ballet Theatre and The Australian Ballet. 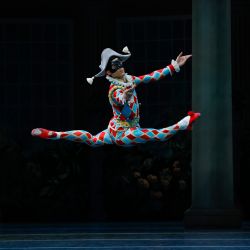 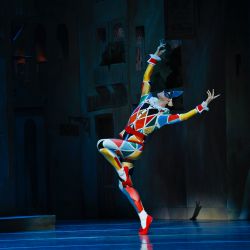 Show People | Christie Whelan-Browne
“Show people” are an interesting bunch, sometimes they come in the forms of a bohemian artist, or a naïve theatre school graduate, or perhaps a veteran of the stage with the hard-earned wisdom...