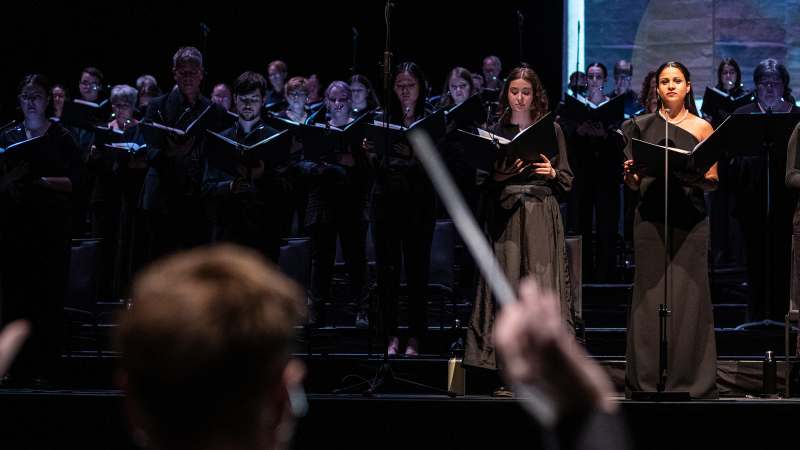 The splendid Adelaide Symphony Orchestra teamed with the Elder Conservatorium Chorale and the Graduate Singers to present a brilliantly conceived program of seldom heard music which addressed one of the most pertinent and preoccupying world problems of the present period – violence in general, and in Ukraine in particular: a fitting finale for this year's Adelaide Festival.

Behind the large choir on the Festival Theatre stage was a screen on which evocative images were shown, illustrating and supporting the music, sometimes superimposing pictures of orchestra or choir members, all of which served to make the whole experience more involving.

The opening Prayer for a Mother by Latvian composer Peters Vasks began the concert, exhorting peace for all things Mothering, introducing first an ominous and tragic feeling, which merged into a pleading quality as the wordless choir joined in, gently resolving the atmosphere into a sighing, loving admiration of a newborn infant.

This was followed by Lili Boulanger's Psalm 129, a rather desperate psalm, accompanied in this instance by images of refugees in varying desperate circumstances. This led straight into a Kaddish Mourner's Prayer by Ravel, with a light baritone soloist (Nicholas Jones) who has a fine range and gentle voice, and an Old Bhuddist Prayer by Lili Boulanger which brought a more confident feeling, along with images of some smiles, and sustained gentleness from the choir.

Peters Vasks' Dona Nobis Pacem was accompanied by recognisable images of the current destruction of Ukrainian cities as the choir and orchestra repeat the plea for peace in a melancholic lament. The ironic conjunction of this agonising prayer for peace against images of the insane destructiveness of war brings the music to a sudden halt, but choir and orchestra resolve it into a gentle plea for peace, making a more confident conclusion to the uninterrupted progression of nicely coordinated works which were the first half of the concert.

Francis Poulenc's unpretentious and exuberant Gloria presents a challenge to any choir, and this one managed it well for the most part, the crisp rhythms and legato passages providing a very apposite sequel to the music that had gone before. The “Laudamus Te” section is where the rhythms are most challenging, and the resulting slight untidiness was recovered in the declamatory “Qui sedes...” section, where the taut Soprano (Stacey Alleaume), with the orchestra and the competent direction of Conductor Benjamin Northey, led the choir to the calm resolve of the “Amen”.

The Festival is to be commended for attempting to minimise paper use and make much more use of digital technology for bookings, communication and promotion of events. This one, however,  needed a  more accessible “Day Bill” giving details of the participants, especially for patrons who are less experienced in searching for and finding the information from websites, QR codes etc. This was the case for several to whom I spoke, and who were among the age group one could expect to be less digitally aware. As time goes on, however, audiences are sure to be able to become familiar with changing methods of communicating.

2022 Adelaide Festival
Prayer for the Living