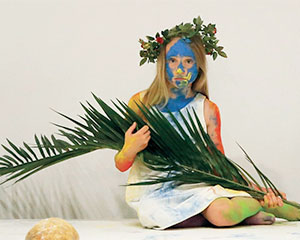 How to write a review when one is gobsmacked? Words failed me at first, then words emerged inevitably, such as: electrifying, amazing, extraordinary, uplifting, challenging, humbling, hypnotic, simply stunning!

The visual power of this remarkable concept, combined with the gorgeous music of Mozart (and others) and the musical and theatrical integrity of a wonderfully professional band of performers made this remarkable production one that will not be forgotten as long as its capacity audience lives.

Yet woven throughout it is the notion of entropy – that everything, including us, will pass – as Mozart himself said, “Death is the true purpose of life.” This theme is not only portrayed, but celebrated as an array of things that have passed – from dinosaurs to ideas, to religions, to buildings, lakes, cities and civilisations – is constantly projected onto the backdrop as the music, dance and action weave together to confront, mystify and enthral us.

The result is a multi-layered, visceral, intellectual and emotional experience wrought out of the groundbreaking vision of Director, set lighting and costume designer, Romeo Castellucci, with the poignant genius  of Mozart’s final work, the symbolic and joyful choreography by Evelin Facchini, expertly executed by the dance troupe (largely from the Australian Dance Theatre), the fine singing of the Adelaide Festival Chorus, the talent and precision of the Adelaide Symphony Orchestra all conducted by Rory Maconald.  These were all impressively enhanced by the soloists, Soprano Siobhan Stagg, Alto Sara Mingardo, Tenor Martin Mitterrutzner,  Bass David Greco and the delightful Treble Luca Shin.

While  Mozart’s glorious Requiem is the musical centrepiece, it is augmented by the inter-weaving of a number of other works, by Mozart and others, emphasising the pleas for mercy and forgiveness, which are threaded through the various movements of the mass, as the dancing and various symbolism inexorably progress towards the final chaos and calm of eternal rest.

But the end is not bleak, and the breathtaking climax is a sure sign of hope after all. In dead silence as the curtain lowered slowly, the stunned silence of 2000 people was only broken by the at first tentative, then thunderous applause which grew and continued from a rapturous audience.

There are multitudinous highlights in this concept and this performance, which is a perfect centrepiece for a festival of arts, and the Artistic Directors of this Festival (Neil Armfield AO and Rachel Healy) are to be congratulated on that point in particular. It certainly augurs well for the rest of the Adelaide Festival, for which Requiem is a great opening.