I (Honestly) Love You | Lockwood Productions 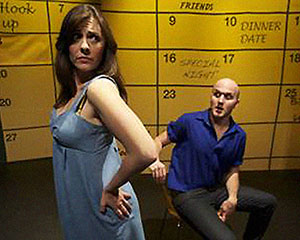 Comedic exploration of honesty in love that hits all the right notes.

Belle suffers from a rare psychological condition, being totally incapable of lying. A morning disagreement over a coffee order introduces her to Lloyd, afflicted with the same truth-telling disorder. They agree to meet again, their first date refreshingly free of any white lies or self-serving half-truths. Matters progress, their mutual love growing despite the various hiccups that arise when meeting the parents and socialising with each other’s friends. The small day-to-day niceties that smooth the path of the longer term relationship lead to some unexpected complications, and Belle and Lloyd find themselves needing to make choices between life, love and hurt feelings.

Damon Lockwood’s tightly written script owes much of its chortle-evoking entertainment value to his skills and experience in spontaneous comedy. Unlike stand up or improvised skits, though, there is less room for performers to read the audience and respond accordingly with a conventional rehearsed production. The clever ways that Lockwood has created flexibility within the script, as well as his theatrically self-mocking asides, play very well through this light-hearted reflection on our widely accepted daily hypocrisies.

As Belle, George Gayler effectively conveys the positive side of the truth-telling affliction, delivering her lines without flinching from some graphic observations and also managing to keep a straight face under extreme provocation. Nick Pages-Oliver takes Lloyd’s inability to lie and turns it into a self-hating festival of over-sharing, his physical responses to the words coming out of his mouth demonstrating the character’s self-awareness perfectly. Lockwood and Talei Howell-Price play a range of supporting characters with gusto, each relishing the opportunity to find the laughs and run with them. Each of them deliver lines with knowing asides to the audience and play with exaggerated characterisation that borders on clowning in its physicality.

The running jokes about independent theatre belie the care that Stage and Costume Designer Cherie Hewson has put into the simple, calendar-themed set design and the matching costuming. The incidental use of calendar-printed fabric for everything from aprons and hair bands to ecclesiastical millinery and bed sheets is a successful recurring sight gag, or maybe even a “timely” metaphorical motif of the performance. Encouraging audience participation in several ways engages enthusiastic support from the crowd and builds an atmosphere that allows the most fantastic plot twists to be accepted.

I (honestly) Love You has been performed several times before, and this cast have taken the development opportunities from previous incarnations to finesse the playful comedy aspects without entirely deteriorating into sheer slapstick. As part of this year’s Subiaco Theatre Festival at the Subiaco Arts Centre, Lockwood Productions have brought the laughs.

Part of the Independent Theatre Festival 2016