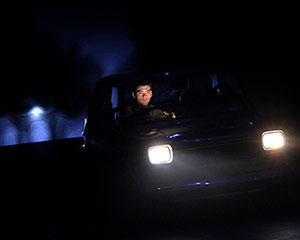 The Drama Theatre of The Sydney Opera House is turned into a Luna Park sideshow for the current production of Ghost Stories.

Presented as a para-psychological lecture by the debunking Professor Goodman (Lynden Jones), sceptic of spectres and spooks, the ghost stories are three case studies conjured before our very eyes.

The second story concerns young Simon Rifkind (Aleks Mikic), a reckless P plater who on a foggy night runs down a pedestrian and fails to stop, his victim reciprocating his moving violation.

The third instalment pits Mike Priddle (Ben Wood) against a poltergeist spawned by his wife's pregnancy.

The narrative is as gnarly as an old chestnut tree, a cobbled together trio of retread bump in the night yarns better suited to a bygone gaslight era.

The production is more concerned with its very pleased with itself smoke, mirrors and revolves, used most effectively in the first story as the night-watchman makes his rounds. There's terrific torch work by the actor John Gregg in this sequence that proves practical technique can be as enhancing as technological whizbangery.

For a play that is supposed to send tingles up the spine and raise the hair, Ghost Stories is strangely lacking in suspense and tension. Like so many films these days that sacrifice story on the altar of CGI, Ghost Stories strains to get to the next bit of illusionary parlour game at the expense of narrative or character arc.

Lynden Jones is perfectly fine as the narrator, clear in expression and exposition and Ben Wood endeavours to inject some comedy in his characterisation of a haunted and unhinged hedge fund maven married to his mobile, but there's not much wriggle room for subtle shading in the shadows and fog of the staging.

Written by Andy Nyman and Jeremy Dyson, Ghost Stories is the supernatural equivalent of The Mousetrap, a creaky old relic, a theatrical revenant, with all the dramatic weight of a wraith.

No phantom of the opera house to chill and thrill us here unfortunately.