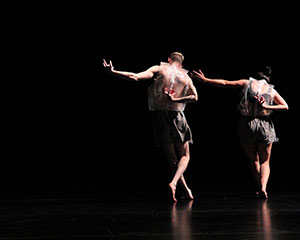 Two performances, two visions, each featuring two dancers – STRUT Dance brings the two top-voted works from their 2014 “Short Cuts” season back for further development, presenting them in a stunning hour of thought-provoking dance.

Opening with Emma Fishwick’s InBetween, performed by Isabella Stone and Ella-Rose Trew, the audience is taken on an energetic exploration of rising and falling levels of tension and awareness. Stone and Trew are physically well-matched, their synchronised movements demonstrating dedicated rehearsal as well as a deep mutual sympathy of artistic understanding. The personal energy levels of the two performers stay high throughout, as each dancer runs recurring laps around the perimeter and across the diagonal of the performance area, without affecting the precise timing and abrupt changes of movement as the piece progresses. Brett Smith’s sound design complements a developing sense of drama, twanging strings maintaining a grounded, earthy feel that keeps large-scale industrial sound effects from overwhelming all other elements.

Sous Vide starts in darkness, silent except for breathing and an odd rustling sound. Torchlight blinds as two points of light move forward from the back of the stage, accompanied by a crackling noise. Other noises startle, but occur in time with the movements of light, eventually revealed as small vacuum cleaners attached to the torches. The gradually rising levels of light in the performance space allow other props to be seen, as well as the mysterious rustling to be disclosed as costuming devised from vacuum seal storage bags, encompassing the dancers’ torsos. Performers Laura Boyne and Tony Currie work together to seal each other’s costumes to play with the key concept of Sous Vide. Tristen Parr’s catchy soundtrack pulls audience awareness and attention along as the duo use body posture and compelling facial expressions to humorously play with concepts arising out of their reactions to changes in the music or developing earlier concepts. Boyne even goes as far as to incorporate costume changes in the piece, further developing the idea of sealing bodies away. The dancers woo the audience with light-hearted frivolity of movement and by theatrical engagement through comic posture and timing.

STRUT Dance has created the opportunity for two different dance pieces to be developed, both tightly choreographed and skilfully presented by talented performers. The works presented in Prime Cuts are more than delightful entertainment, showcasing the best of Perth’s cutting edge choreography, dance performance and musical composition.