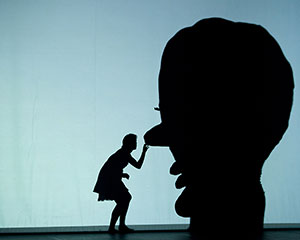 Melbourne has the privilege of being one of the stops on internationally acclaimed dance troupe Pilobus’ world tour, performing its groundbreaking new show Shadowland.

Having featured on the 79th Annual Academy awards, and performing for Oprah Winfrey, Shadowland, simply put, is a fusion of shadow theatre, dance and acrobatics – but in actuality it is so much more.

Using screens of all sizes to project onto them seemingly impossible body morphing, where dancers magically transform into exotic creatures and beautiful imagery, to convey a fantastic tale, Shadowland brings to life the story of a young girl who is at life’s cross road.

While she reluctantly prepares for bed, she wishes that her parents’ perception of her would change. Convinced that she is more mature than what she is being given credit for, the young girl wishes for her independence. With her thoughts turning inward into her dreams, she eventually falls asleep. She is awakened by her own shadow, behind her bedroom wall.

The wall begins to spin, the girl becomes trapped on the other side, and she finds that she is unable to get out, thus her self discovery journey begins. This leads her further and further down into Shadowland, unable to find an exit out of her situation.

As her odyssey unfolds, the young girl is exposed to a myriad of odd situations. Bizarre mystical creatures cross her path, sinister individuals attempt to take advantage of her and three chefs even attempt to cook her up into a soup.

For approximately 90 minutes, with little more than a few lights and some elementary props the dancers, are able to create giant heads, alien beings (I think), trucks, and so much more, by contorting and playing with depth perception.

The shadow work is mind-blowing, especially if you take in consideration how challenging it is make a simple hand shadow puppet on your bedroom wall. However, I found that, what happens in front of the screens in full light is perhaps even more impressive.

The movements which appear to be so effortless and fluid, are actually very challenging on the dancers’ bodies, and it is obvious that something so “simple” only comes from years of persistent and diligent training. The Pilobolus dance troupe is a force to be reckoned with.

From Pilobolus’ official website, I learned that the troupe’s name comes from a fungus which is able to propel its spores with extraordinary speed, accuracy and strength. Originally conceived by a group of Dartmouth College students back in 1971, Pilobolus’ goal is to persistently form diverse collaborations in order to shatter barriers between disciplines and challenge the way society thinks about dance.

Judging from Shadowland’s witty storyline, spectacular performance by the dancers and original way of execution, I’d have to admit that Pilobolus lives by its philosophy, and it is indeed breaking barriers. I am certain that, upon seeing this spectacular show, society will definitely gain a different perspective about dance.