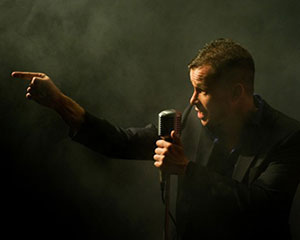 Leonard Alfred Schneider. The name wouldn't fit on the marquee, as the story goes, so he became Lenny Bruce. And, in 1962, he came to Australia, brought by Lee Gordon. He was probably the most misunderstood stand-up of all time (as well as one of the most influential) and no moreso than downunder. By the time he arrived here, he'd already been banned from appearing in numerous cities in the US. Given his career-long fight for freedom of speech, this was just a warmup. By the year 1966, his last, he'd been banned in almost every nightclub in those United States. It wasn't necessarily that they loathed Lenny. It was that, given his deliberately loose lips, they'd likely end up slapped with an obscenity conviction, such as Lenny landed in 1964, after a protracted trial. It wasn't until long after his premature death, at 40, that he was found not guilty of the earlier charge. Small consolation.

Through the 50s and early 60s, Lenny was the pinup boy for hip and rebellious. He took sacred cows to the abbatoir. Into this milieu steps Benito Di Fonzo, himself a greying hipster, of sorts. The peripatetic poet, drummer and cyclist indelibly etched his retro, beatnik style onto the right side of my brain with The Chronic Ills of Robert Zimerman, aka Bob Dylan (A Lie), a play, of sorts, but better described in Di Fonzo's own parlance: 'a theatrical talking blues and glissendorf'. Don't bother pretending you know what a glissendorf is unless you're a hardcore Dylan aficionado.

Lenny Bruce: 13 Daze Un-Dug in Sydney, 1962 follows in a similar vein, inasmuch as the script has an amphetamined velocity, which has much to do with Di Fonzoism, but something, presumably, also to do with the director common to both works, Lucinda Gleeson. Not so much glissendorf as 'a vaudevillean mash-up of stand-up, documentary and jazz' in a 'surreal investigation of the attempted Sydney tour of this legendary comedian', 'loosely distorted from the book Lenny Bruce: 13 Days in Sydney, by Damien Kringas. It's vintage, tongue-in-cheeky Di Fonzo and proves an apt description, with its sidelights of people Lenny encountered in the Antipodes, on his arrival direct from a season at Peter Cook’s Establishment Club in London. Sydney proved to be a long way from Soho, in more ways than one; by Lenny's standards, a tragically sinless city in which he outdid himself, breaking his own world record in being banned after only one show.

We might think of the media as hard-as-nails now, but it's hard to get a handle on just how tough they were then. At the very same time, he was hounded by vice squad dicks, 'as crooked as an elbow during the six o'clock swill'. It was an ignominious insult to a comic who history shows and, I'm sure, any acolyte would freely admit, influenced generations of the same profession. Bruce's thirteen lousy days in and about the Cross were emblematic of his apparent and very well-justified feelings of entrapment at home, perpetrated by police and a puritanical, narky, wolverine media pack, baying for blood and sensational headlines.

Sam Haft plays Bruce, endowing him with a broad Bronx accent he didn't really have, but which, dramatically, serves good purpose, in emphasising his Jewishness, which was one of his key themes. Just as Di Fonzo's Dylan homage, sensibly, sought not to faithfully impersonate the now 71-year-old singer-songwriter, 13 Daze scrounges and ranges, far and wide, looking for the essence, the soul of the man. Haft seems to be not merely acting, but really working, investing virtual blood, sweat and tears to intuit and channel the sum and substance of the man, leaning into his character more and more as the play progresses. Chances are every performance will be different, as he fervently seeks Lenny, and finds a little bit more of him with each.

If this is Haft's audition for things to come, he passes, with flying colours.

Behind him is a versatile and good-humoured supporting cast (Lenore Munro, Damien Strouthos & Dorje Swallow) which, as Haft puts it, takes on more than forty of 'the most colourful characters in American, Australian and British culture, weaving their way through jazz, language (poetic and downright filthy) and every vice known to man'. The trio of actors is especially well-cast has they all seem to have an almost innate sense of comedy.

Set & costume designer Andrea Espinoza takes the audience in a time machine back to early 60s Sydney, with a visual evocation rustically derived from ragtag props, dusty old curtains and the Bondi Pavilion's pre-existing fleabag aesthetic. Lighting designer Kim Straatemeier is sympathetic to the down-at-heel vibe. Sound designer Nathaniel Edmondson, though, has some issues to address, as lines are often lost to the ether; ('though this is sometimes because the rapid-fire pace is, arguably, just a little too AK-47).

Producer, Fiona Boidi, and director, Gleeson, can be very proud of this work, which is anything but pedantic or precious, instead focussed on recapturing the vitality of Lenny Bruce and the volatility of the era. In fact, if it were slicker, it would likely fall over: its charm and theatrical efficacy lies in its magnetic pull, dragging us back through the decades into shoddy, seedy hotels and less than venerable venues, in a Sydney whose sociopolitical milieu hardly engenders fond memories for any freethinking individual. It plays like jazz; 'charted', but as if improvised, with the edge that electricity that generates in performers and audience. The freewheeling style and texture takes us deep into Lennyland, as he was one cat that couldn't live without cool. To illustrate, Di Fonzo has Haft riff on the subject of Bird, while Charlie Parker (Swallow, who plays sax well) appears on a stage within a stage. It's a scene that draws a bigger picture: Lenny believed speech should be as open, candid and free as jazz.

Bruce was and is all too easily dismissed as a foul-mouthed junkie. Both of these things may be true, but he was so much more than that. The pejoratives have been deployed ruthlessly and scurrilously by conservatives and wowsers to deflect from his true purpose, which was far broader than broad comedy. He was an important social critic, satirist and, for my money, philosopher. 13 Daze has the insight and intelligence, even amid its casual, angular momentum. Perhaps it's no coincidence he was, effectively, crucified as surely as another famous individual of similar inclination and of the same heritage. Why are we always so keen to shoot the messenger?